For Resident Evil 2, Shimogama worked alongside Isao Ōishi in drawing concept art;[2] Shimogama handled creature proposals while Ōishi handled characters. Consequently, Shimogama is responsible for the designs of creatures such as the Licker and Plant 43.[3] Other ideas for the game which were rejected included alternate bosses like Zeiram and Golgotha, a G-Virus infected Annette Birkin, and zombified primates with designs alternating between monkey and ape.

Notes on the Licker design 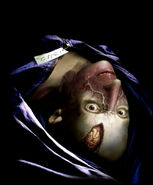 Nod to Shimogama seen in the top left of either character's B-scenario after the truck crash.