STAGLA was a company that operated a chain of gas stations in the United States, with locations in Raccoon City and Tall Oaks.

Its Raccoon City location was located on Park Street, near the City Hall, to the north of it. During the Raccoon City Destruction Incident, the gas station was closed and deserted with a steel shutter protecting the entrance. It was briefly visited by Jill Valentine while she searched for materials to active the tram. Carlos Oliveira and Nikolai Zinoviev also investigated the gas station. After a live spark plug in the garage ignites a gasoline puddle, the gas station goes up in flames.

In the 2020 remake, its location was a short walk from The Subway station located on Redstone Street.

The Tall Oaks location was located at the end of Sizemore Street in the city area. Three survivors—a police officer, a civilian named Peter, and his girlfriend Nancy—are backed into a corner in front of the gas station by a horde of zombies. Leon Scott Kennedy and Helena Harper team up to help the survivors. When an infected BSAA squad crashes an armored vehicle into a row of fuel pumps, the survivors shoot an active gasoline line and destroy the gas station.

In the Resident Evil: Operation Raccoon City timeline, the gas station is found in a different location. This is where the U.S.S. Delta Team faces off against Spec Ops and Hunters.

The security shutter is down.

Jill attempts to raise the shutter.

A horde of zombies swarm the gas station.

Carlos attempts to fight them off.

Jill helps Carlos outside of the entrance. 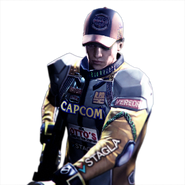 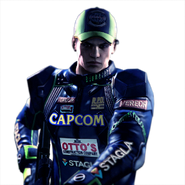