STI EAGLE 6.0 is a handgun featured in Resident Evil 3: Nemesis.

This gun can be acquired by defeating Nemesis twice on Hard Mode in any of the non-mandatory fights, causing him to drop the EAGLE Parts A and EAGLE Parts B. Like all assembled weapons in Resident Evil 3, it will be already fully loaded when created.

The Eagle has a fast rate of fire and reloads extremely quickly, allowing the player to continuously shoot with very little recoil. It has the same capacity as the Samurai Edge, with 15 rounds and slightly better stopping power. A zombie will drop after 4 rounds as opposed to 5 rounds for the Samurai Edge.

The Eagle's telescopic sight gives a much higher chance of critical hits. A successful critical hit causes similar damage to a Magnum round, decapitating zombies and killing or severely damaging stronger B.O.W.s.

The only real drawback to the Eagle is that it cannot use enhanced ammo.

Players can acquire this weapon easily by using the gas lamp in the restaurant and the electrical cable in the clock tower to disable Nemesis twice and claim the Eagle parts without having to expend ammunition or health.

Carlos Oliveira uses the STI Eagle as a backup weapon in The Mercenaries bonus game, fully loaded, and with 90 spare rounds. 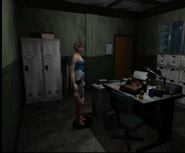 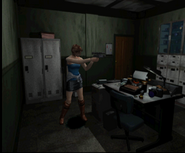 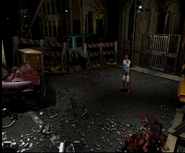 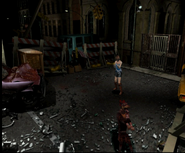 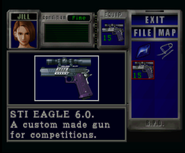 Item examination
Add a photo to this gallery

Retrieved from "https://residentevil.fandom.com/wiki/STI_EAGLE_6.0?oldid=835516"
Community content is available under CC-BY-SA unless otherwise noted.