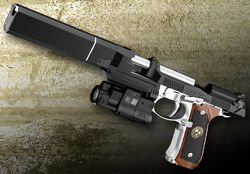 The Samurai Edge (Albert. W. model 01) is an airsoft gun produced by Tokyo Marui. It was released in April 2017 as a tie in product to Resident Evil 7: Biohazard. It based on the weapon of the same name in the series lore and the "Albert-01" or "Samurai Edge - AW Model-01" as its named during gameplay. Tokyo Marui also published a web article called "Samurai Edge AWM01 Archives" about the weapon.

Retrieved from "https://residentevil.fandom.com/wiki/Samurai_Edge_(Albert._W._model_01)?oldid=599376"
Community content is available under CC-BY-SA unless otherwise noted.