No
The Samurai Edge makes an appearance in Resident Evil 5. It is seen used by Albert Wesker during his fight with Chris. He draws it out on Chris during the fight on the aircraft. He points it to Chris' head and says a few lines, before getting interrupted by Sheva stabbing him in the forearm with her knife. After more fighting, the Samurai Edge is shot out of Weskers hand by Sheva. It is presumably lost shortly after the aircraft crashes into a Volcano. 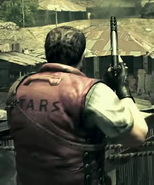 Barry with his Samurai Edge
Add a photo to this gallery
Retrieved from "https://residentevil.fandom.com/wiki/Samurai_Edge_(HG)?oldid=767899"
Community content is available under CC-BY-SA unless otherwise noted.