Resident Evil 5
Score stars are small collectibles in the extra modes of Resident Evil 5: Lost in Nightmares and Desperate Escape. This item replaces Gold in these two modes, its only purpose is to give the player points towards the end-game score.

In Lost in Nightmares, there are 18 pre-determined score stars within the environment that will unlock the Wish Upon a Star award once all are destroyed.

Desperate Escape also features a few pre-determined score stars in the stages, though there is no award or unlockable related to them.

In Resident Evil: Revelations, score stars make a small return by being the model used for the Battle Points (BP for short) in Raid Mode, unlike RE5, these Battle Points serve as a currency and can be used to buy weapons, items and player upgrades in Raid Mode. BP is also present in Resident Evil: Revelations 2, though only as a Campaign currency, and the star-like model from RE5 was ditched, BP instead is an invisible currency in the game. 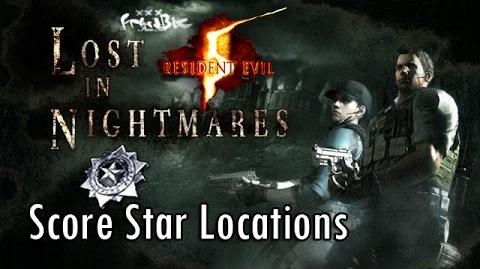 Resident Evil 5 Lost In Nightmares Score Star Locations
Wish Upon a Star award guide
Add a photo to this gallery
Retrieved from "https://residentevil.fandom.com/wiki/Score_star?oldid=771854"
Community content is available under CC-BY-SA unless otherwise noted.