The Self defense gun is found next to a hanging corpse in Room 001 of the Dormitory. One of the two rounds has already been fired and no additional ammunition can be found. This weapon inflicts a sizable amount of damage and can instantly kill most enemies encountered in the game. Its one-time use is typically reserved for bosses like Black Tiger and Yawn, as it deals massive damage. The damage it deals is comparable to Barry Burton's Silver Serpent, but its capacity is inferior (6 rounds vs 1). It also, unlike Barry's revolver, will never instantly kill a boss. It should be noted that despite the damage from this weapon, it does not decapitate an enemy. 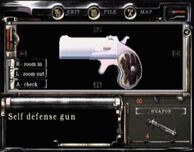 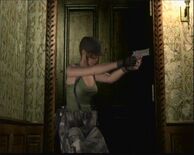 Add a photo to this gallery
Retrieved from "https://residentevil.fandom.com/wiki/Self_defense_gun?oldid=742542"
Community content is available under CC-BY-SA unless otherwise noted.