During the Soviet-Afghan War, Vladimir served as a Polkovnik (полковник) in one of the Soviet Army's Spetsnaz forces. As part of a research project in human cloning, he became father to ten humans, each with their growth accelerated to appear roughly his own. The unit fought together against the Mujahideen, and was withdrawn by 1989. He may have known Nikolai Zinoviev during his work there, as they would become close friends.[1] The Soviet defeat, mixed with economic stagnation and new media freedoms, resulted in the disintegration of the Soviet Union in 1991. No longer financially capable of funding such a massive military, the newly emerged Russian Federation began a two-year Army re-organisation and dismantling effort, which saw many Soviet soldiers discharged and left unemployed.

Not long after the Soviet collapse, the Umbrella Corporation took advantage of mass unemployment of soldiers to expand its paramilitary organisations. Vladimir and Zinoviev were both approached, among others, due to their talents, and accepted the offers. Finding he was one of a small group of people genetically compatible with the experimental ε strain, Umbrella insisted he hand over the clones to take part in preliminary human research on their Tyrant Project, which planned to create supersoldiers for the US military. Though he had grown a very close bond to the men, seeing them as a part of himself, he nonetheless sold them out to Umbrella, seeing their sacrifice as an unfortunate but necessary evil.[1]

During the early 1990s, Vladimir led the expansion of these paramilitaries with the founding of the Umbrella Biohazard Countermeasure Service. In keeping with his Army training, Vladimir remained loyal to Umbrella CEO Dr. Oswell E. Spencer, and would enforce obedience to him through the use of the Monitors, a private security force with agents within Umbrella's paramilitaries.[2] Following his surrender of the clones for Tyrant research, Vladimir became closely tied to the Tyrant Project as it moved on to production models,[2] and would even lead the proposal for the Talos Project, a next-generation B.O.W. to succeed the T-002, using microprocessors linked to the brain.[3] He also became a rival of Dr. Albert Wesker, a former member of the Tyrant Project who had moved to Umbrella's Intelligence Division, and treated him with suspicion.

In May 1998, the ε strain escaped containment in the Arklay Laboratory, causing a number of civilian casualties as well as contaminating other facilities in the Arklay Mountains. Behind closed doors this represented a major scandal within the corporation, and the possibility of having the Monitors purge disloyal executives became realistic. In July, Umbrella HQ received the findings from the Raccoon Disaster Contingency Committee, and the Intelligence Division was given orders to blow up the laboratory in a mission dubbed "X-Day". In a letter from Zinoviev reporting this development, Vladimir was reminded that it would result in the destruction of T-011, their Talos Project candidate.[4] By then the unfinished T-002 had already been superseded by the T-103 mass-production series, but Talos was still of research significance.

Arriving in the United States, Vladimir travelled to the Arklay Mountains with his two Ivan bodyguards - two T-103s trained to follow his orders. Vladimir's first venture was not, however, to the lab, but to the nearby executive training center. The building, once used by Umbrella co-founder Dr. James Marcus for the training of new employees, had been abandoned for 20 years and was undergoing a survey ahead of re-opening when it was contaminated by the virus. Placed in charge of the project, Wesker and Dr. William Birkin instead made plans to detonate a bomb placed under the building. Vladimir warned Wesker about this decision, as it had not been proposed to Spencer first, and ordered one of his Ivans to fight him.[5] When time ran out, he left with the Ivans to the Arklay Lab, leaving Wesker to escape from the bomb on his own.[6] Suspicious of Wesker, who was to take part in X-Day evacuated the facility with T-011 and the U.M.F.-013, the lab's supercomputer which contained an archive of their research data. Walking straight outside, the Ivans protected him from the escaped Cerberus test subjects which had made the forest their territory.[7]

In September 1998, increasing concern about Raccoon City's safety led Vladimir to mobilise the U.B.C.S. This suspicion proved real when a modified ε strain contaminated the city's drinking water the following week, causing a massive outbreak which mutated thousands into Zombies. The city was locked down on orders from the Pentagon, and the U.B.C.S. was sent into the city officially to assist in the rescue of civilians, but in fact to test out the mutants against a trained force, with the Monitors within the U.B.C.S. ordered to destroy incriminating evidence or evacuate with research. The outbreak was worse than Umbrella HQ had anticipated, and many of the mercenaries, some of them former Soviet soldiers, were massacred. On the night of 28 September, only two days after drop, Vladimir made preparations for taking direct control of all surviving equipment and personnel, effective at midnight on the 29th.[8] When a helicopter returned from dropping off T-103s into the city, Vladimir boarded it and flew out to a facility he had evacuated the U.M.F.-013 to months earlier.[8] The operation was a success, and he evacuated with it alongside an executive on the early hours of 1 October, moments before the city was destroyed in a military operation.[9]

The Twilight of Umbrella

In the aftermath of Raccoon City, the US government turned on Umbrella USA, federalising its assets and accusing them of liability over the deaths. This plunged the Umbrella Corporation into a lengthy and expensive legal battle known as the Raccoon Trials. Umbrella's ability to control its own workforce also deteriorated, and with the loss of the US military as a buyer, Vladimir moved their base of operations to a lab in the Caucasus below an oil refinery. There, the facility began mass-producing old B.O.W.s once considered failures, targeted instead for a terrorist buyer that would share the US' standards. Elsewhere in the facility, Vladimir oversaw the completion of the Talos Project.

In early 2003, an accident happened at the facility, and a t-Virus strain leaked out once more. B.O.W.s escaped captivity and killed people in a nearby village, earning the attention of Wesker, who was seeking the U.M.F.-013 for his own ends. Along with Wesker came members of a privately funded anti-B.O.W. force funded by Umbrella's rivals, following the same trail. By this point the outbreak had spread to 98% of the research staff. While releasing Talos to confront the paramilitary group, Vladimir sent out his two Ivans to deal with Wesker, who had himself mutated to gain superhuman abilities since their last encounter. Ultimately, he was forced to fight him himself, infecting himself with a t-Virus strain. Being compatible with the virus, he mutated into a powerful creature with his arms fuses into a dangerous claw. Despite Vladimir's immense strength, agility and organic weaponry, Wesker destroyed him, putting an end to his delusions that Umbrella and the Tyrants, his "brothers", would usher in the return of Russia's glory. Despite being beaten and liquefying, Vladimir defiantly declared that "they" were "not done yet," implying that even while dying, he fully intended to continue fighting Wesker. The company's final leader defeated, Wesker stole all of the data, compressed into one disc, and shut down the Red Queen. The base was decommissioned and all data was erased in the process, ending Vladimir's plans and sealing Umbrella's fate.

Sergei with an Ivan. 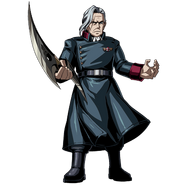 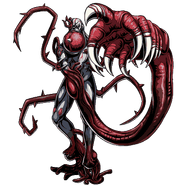