Treatment pool (処理プール, Shori pūru?) is an area of the Raccoon sewers that appears in Resident Evil 2 and Resident Evil: The Darkside Chronicles.

This area is directly below the Control room, it shares the same catwalk with it which will change its location based on the use of the Valve Handle.

In the Claire game, Annette Birkin will appear in this room. In the Leon game, she will instead appear in the Control room.

This room is featured near the end of the Memory of a Lost City 5 chapter. There is a brief moment where the area above (Control room) can be seen during gameplay. Annette also appears in this room, the dialogue has some slight differences from the original, such as Annette not seeming any desperate over Sherry being in danger.

There are a total of 5 Lurkers in this room, 1 of them can't be killed (the one shown at the top). Upon entering this room, there is Shotgun ammo to the left side and a Herb and golden bars to the right side. 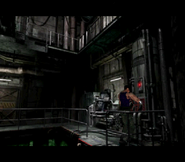 Retrieved from "https://residentevil.fandom.com/wiki/Sewer/Treatment_pool?oldid=859051"
Community content is available under CC-BY-SA unless otherwise noted.