The Ship Deck is a location in Resident Evil 5.

As player start their position in the ship deck for Chapter 6-1, look to the left to espy a Majini standing on the observation tower. Player can dispatch it with a rifle, then search another target to shoot in the same direction. This will instigate the first attack wave of several Majini.[1] Player can then jump down from the platform to find two crates. Player can make their way toward the observation tower by climbing the ladder while fighting the remaining Majini. Jump down again, head to the front of the ship where player can find a few crates and green herb.

There will be an ambush as soon as player climbs the steps leading the opposite front of the ship. Two Adjule will leap from the container, with few Majini directly ahead. Turn around and run straight for the ladder to the ship front. Kill all the enemies in range from an elevated position, then head back to the previous position to encounter another group with more Adjule and Big Man Majini. The last majini will mutate into a Duvalia once player inflicted enough damage. After all enemies is killed, follow the path until player reach the green button. Player can either press or shoot it to open the way forward.

Because the door to the control for the crane is locked which require a "Crane Keycard", player can climb the ladder on the west side of the ship, then push the large container aside. Next, Sheva will be caught in the Majini trap. After a brief cutscene, the play will resume with player outside the cage as a horde of Majini will attacking from both sides.

A BSAA Emblem can be found inside the shipping container left of the cargo lift in this area. To destroy it, player can either shoot it with the Grenade launcher or toss a Hand Grenade.[2]

Player must battle multiples Majini during this point, one will mutate into a Duvalia. Player must defeat it for it to drop the Crane Keycard. Shoot the green button to open a path, then player must fight their way to the control panel for the crane via two ladders, using the collected Keycard to open the locked door. Sheva will be attacked by Adjule while player make their way. One Majini will be guarding the control for the crane. 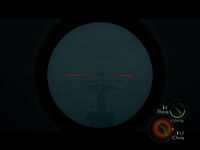 Another BSAA is positioned on a radar tower at the far south of the ship. Player can shoot it with the H&K PSG-1/Dragunov SVD or S75.[3]

Once player have set Sheva free, regroup with back where she was trapped early on.

Climb the ladder to get on top of the shipping containers. Player can head straight to find a green herb. Take the second right at the back, jump across three containers to find a safe containing a gold bar inside. Go back and head to the left to reach an area with two cargo elevators. Player will face Big Man Majini. To get through this area, step on the cargo elevator, and Sheva will shoot the button to raise it to the upper level; fire at the button on her side to do the same thing. Player will be attacked by few Adjule as they run to reconvene on the east side of the ship. Climb the ladder to the north and activate the button to raise the cargo elevator then run around the corner to find the second safe containing another gold bar. The exit is a short run to the south; the door will lead to the Ship Hold.[4]

It's locked. I need a keycard to open it.

Retrieved from "https://residentevil.fandom.com/wiki/Ship_Deck?oldid=693954"
Community content is available under CC-BY-SA unless otherwise noted.