The Shock Grenade is a thrown explosive weapon that releases an electric blast. It is particularly useful when thrown into a body of water.

In Revelations, the shock grenade serves as a weaker version of the standard hand grenade, doing only slight damage to most enemies within the blast radius. This weapon really shines when tossed into water. When used in this fashion, the electric blast is considerably stronger and the blast radius seems to be bigger as well. The blast is so much more powerful, in fact, that a single shock grenade can kill several enemies that are close together. This makes this sub-weapon extremely effective against packs of Ghiozzos and Sea Creepers.

The shock grenade is also effective against certain enemies with high defense, like the Scarmiglione. It is also very powerful against the Raid Mode only creature, the Aculeozzo.

This weapon's splash damage can injure and stun the player if thrown too close. As a result, this weapon can not be thrown when the player is swimming, unlike the Pulse Grenade. 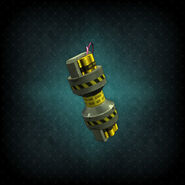 RE.net image
Add a photo to this gallery
Retrieved from "https://residentevil.fandom.com/wiki/Shock_Grenade?oldid=640390"
Community content is available under CC-BY-SA unless otherwise noted.