The Shotgun (ショットガン, shottogan?) is a weapon found in Resident Evil 3: Nemesis. This weapon is identified to be a Benelli M3S.

It is found by Jill Valentine early in the game in the Y-shaped alley where Brad Vickers sprints away from.

The Benelli is a shotgun with a capacity of seven shells. This weapon is effective in close range and can decapitate a zombie's head if aimed upwards in close range. It is also a recommended weapon against stronger and faster enemies such as the Hunters, as it has more stopping power than the Handgun. However, the shotgun has low reloading speed and may leave the player vulnerable to enemy attacks.

Like the M92F Enhanced, the M3S Enhanced is created by loading Enhanced Shotgun Shells into the Shotgun. It does not have any changes in appearance or capacity, but has a slightly noticeable "boom" when firing it. However the recoil is increased, with Jill backing off slightly with each shot fired.

It is quite powerful, especially against stronger enemies; often requiring less rounds to kill an enemy. The ability to decapitate a zombie's head still remains if aimed upwards.

This weapon is used by Mikhail Victor in the mini-game. It is capable of killing multiple zombies in one blast, earning extra time quickly. The player will also be able to acquire 14 Enchanced Shells from the last hostage in Bar Jack as a gift for saving him. 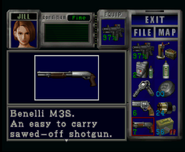 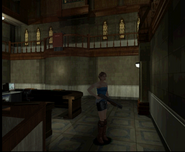 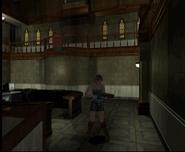 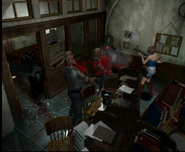 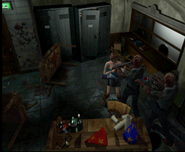 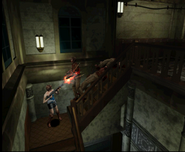 Retrieved from "https://residentevil.fandom.com/wiki/Shotgun_(RE3)?oldid=790620"
Community content is available under CC-BY-SA unless otherwise noted.