Siege is a multiplayer mode in Resident Evil 6[1] that was released for the Xbox 360 on March 5, and March 6 for the PS3. It has since been made available for the PC.

In Siege, six players are split into two teams, with one team being Agents and the other team being Enemies. The Agents play as human characters, whose objective is to protect the AI controlled rookie BSAA agent - while the Enemies play as various creatures whose objective is to kill the rookie. The game consists of two rounds, with teams switching between the roles of humans and enemies. The human team wins a round if the BSAA agent survives, while the enemy team wins if they succeed in killing the agent.

Throughout the stage, agents can find powerful weapons as well as time-reduction bonuses to aid them, though the bonuses have timers that limit their time staying on the stage, and can disappear. Agents can also give commands to the rookie in order to guide him to safety. The enemies, on the other hand, can make situations more complicated for the Agents by breaking large crystals containing more dangerous enemies. 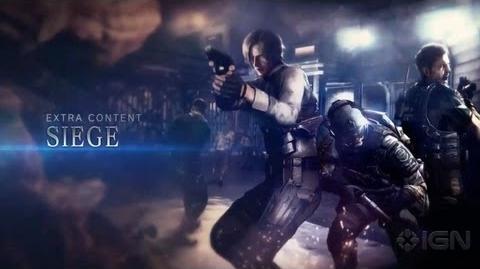 Retrieved from "https://residentevil.fandom.com/wiki/Siege?oldid=664593"
Community content is available under CC-BY-SA unless otherwise noted.