The Silver Ghost is a personal firearm that belongs to Leon S. Kennedy, designed by Joseph Kendo.

In 2004 Leon, fresh off his special training to work for the United States government under the direct order of the president was given the mission to find and retrieve the current president at the times daughter Ashley Graham who had gone missing. When reports came in that a girl matching her description had been seen in a rural village in Europe Leon had a bad feeling that this wouldn't be a simple field investigation so in preparation, he visited Joseph Kendo to gain a custom handgun. Originally seeking his own version of the Samurai Edge Joseph turned him down saying that while the Samurai edge was a "great gun" that it was just a gun with great popularity and that anyone could use it saying, "The ultimate tactical gun doesn't need a base gun" and decide to show Leon the Gun he designed completely from scratch with Leon stating that it was "an absolutely new Samurai Edge". Originally Joseph thought of calling it the "Gray Phantom" as Leon often saw phantoms of the Racoon City Incident but Leon decided to call it the "Silver Ghost" saying that he was a man who disappeared from this world during that incident that "Wanders in the dark and gray fog". Leon continued to use this handgun in October 2005 when he entered the Harvardville International Airport during a viral outbreak, though with a flashlight in place of the laser module.

The January '06 issue of ARMS, a Japanese airsoft magazine, contained a special which included articles about the origin and replication of the weapon. The story explaining the creation of Leon's handgun is written by an ARMS magazine author and is noted to have no connection to the story. However, the story was based on interviews with weapons designer Ryoumura Jyoshin; so arguably, to an extent, the general scenario could be seen as expanded canon loosely based on Jyoshin's personal story for the gun.

According to the story, Leon visits Joe Kendo and requests to have a handgun built for him before leaving for his mission to investigate Ashley's kidnapping. Kendo considers Leon's request for a tactical handgun with certain parts and surprises him with a completely original design. After seeing it, Leon approves of Kendo's custom creation. Leon names it the "Silver Ghost" to match his view of himself, a spirit pulled out from his body. Leon also inserts his own skull mark into the grip.[1]

There was also an article about the making of a replica of the weapon by the staff of ARMS in conjunction with Ryoumura Jyoshin. 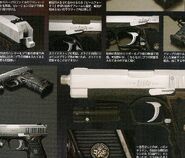 A limited run of 1/6 scale models was released in Japan with preorders of the PS2 version of Resident Evil 4.