The Soldats were mutant humans resulting from the infestation with the Cadou parasite and mechanical modifications. Their name is derived from the German word "Soldat", which means "Soldier".

Some time after Karl Heisenberg was bestowed his factory, he started experimenting with human corpses to build an army of mechanically-modified mutants, intending to one day use them to overthrow Miranda.

The Soldat production has been ceased after Chris Redfield destroyed the entire facility and Ethan Winters killed Heisenberg himself.

Soldats are mutated humans experimented on by replacing their heart with a Cadou parasite. Their muscles are stimulated with electricity, however they are nearly completely brain dead; as such, their only instinct is to destroy. Their craniums are outfitted with cybernetic headgear in order to stabilize their neural activity, allowing them to follow the most basic of commands; the ones with unstable physical condition are fitted with breathing apparatus to ensure they have sufficient oxygen supplied to their body. The rest of their body is equipped with other machinery to improve their combat capabilities.

Most Soldats use arm-mounted drills to impale, bludgeon, and shred their enemies. Their main weakness is the red-glowing exhaust port on their chest, used to vent heat from their Cadou reactor. Unlike the other mutants infected by the Cadou, Soldats don't calcify but instead implode due to their reactor.

There are several variants of Soldat encountered throughout the factory:

All Soldats (except for the Sturm) use their arm-mounted drills to attack. Their weak point is the glowing Cadou reactor in their chest which briefly stuns them with a hit by a powerful firearm such as the W870 TAC. They will often attempt to shield their weak point with their drill arms, but shooting them in the head can destroy their control units, causing them to leave themselves open at the cost of increasing their aggression. The Soldat Panzer does not have an exposed reactor because of their heavy armor, and therefore the armor must be knocked off before the reactor is revealed. 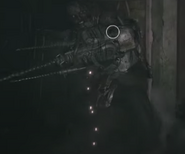 Sturm enters from the wall.

Sturm engulf the area with fire.

Sturm engulf the area with fire once again.

Sturm about to explode.