The F-Shaped Corridor (F字型廊下, F-jikei rōka?)[1][2] is an area of the Spencer Mansion, located on the first floor of the west wing. This area is featured in Resident Evil (1996) and the 2002 remake.

Original Resident Evil is an F-shaped corridor that leads to several different rooms on the west side of the mansion. Several lamps are used to brighten up the corridor. The entire wall is decorated with green wallpaper.

In the 2002 Remake, a candelabra is placed on top of a table near a window. Several wall sconces are placed to help light up the area. A few windows were also added along the wall heading towards the Greenhouse.

There are three zombies shambling about this corridor. After returning from the Guardhouse, it will now contain two Hunters, regardless of whether the zombies were killed or not.[3]

When returning from the greenhouse, two zombies will enter the corridor by crashing through the windows near the table. In Chris's scenario on normal and below, there will be a flash grenade near the door to the 1F west staircase and a battery pack in Jill's scenario. There will also be a dagger next to the tiger statue room's door on easy and very easy.

After returning from the Guardhouse Residence, a hunter can burst through from this corridor into the tea room.

The door to the Greenhouse

Zombies are entering through the windows 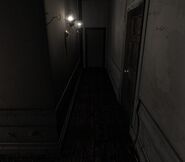 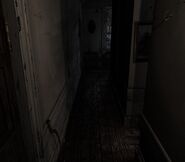 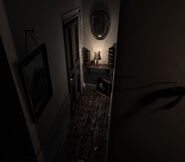 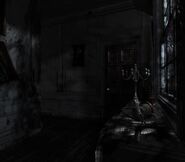 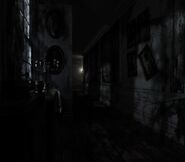 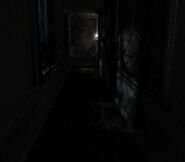 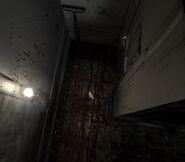 Retrieved from "https://residentevil.fandom.com/wiki/Spencer_Mansion/F-shaped_corridor?oldid=771908"
Community content is available under CC-BY-SA unless otherwise noted.