The mirror corridor (鏡のある廊下, Kagami no aru rōka?)[1] is an area of the Spencer Mansion. It is unique to the 2002 remake, and replaces the 2F western corridor.

It is a long corridor that is lightened up by the Candle Sconces on the wall. The corridor is composed of; two statues, which one of them is broken. Plenty of large mirrors are also placed on the corners of the corridor. The corridor leads to multiple different rooms on second floor of the west side of the mansion.

A collapsed Crimson Head can be found directly in front of the player, with a number (dependent on difficulty) of green herbs behind it when first entering this room from the birdcage corridor. This Crimson Head is one of two mandatory encounters in each playthrough; the other being the Crimson Head Prototype 1.

Two other zombies are situated around the corridor. The Golden Arrow can be found on the broken statue, which can be examined and then used to get the Book of Curses and Sword Key. Near the broken statue is a large mirror with a handgun magazine in front of it. 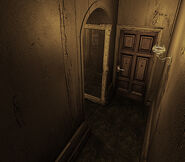 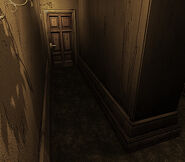 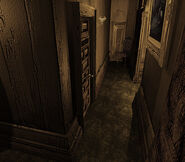 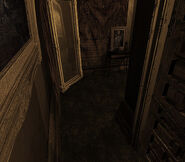 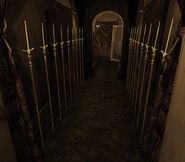 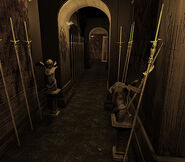 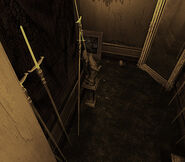 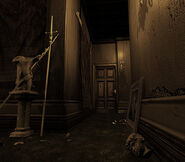 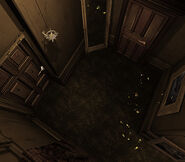 Retrieved from "https://residentevil.fandom.com/wiki/Spencer_Mansion/Mirror_corridor?oldid=744435"
Community content is available under CC-BY-SA unless otherwise noted.