The 1F west staircase (1F西階段, 1F nishi kaidan?)[1] is an area of the Spencer Mansion located in the west wing. This area is featured in Resident Evil.

It is the first floor west corridor. A large pillar is placed in the middle, several lamps are hung up on the wall to brighten the corridor up. There are few windows built in the wall.

In the 2002 remake, the corridor was added with a few paintings on the wall and a small cabin placed against the wall containing wooden boxes on it.

In the original Resident Evil, either Chris or Jill will encounter three zombies here. However, upon revisiting the Mansion later, three Hunter αs will present instead. As Chris, if Rebecca Chambers had not been attacked by the Hunter inside the Library room, the event will occur here instead. Either way, if Chris fail's to rescue Rebecca in time, she'll be consider as dead.

In Resident Evil: Director's Cut, three Cerberuses will smash through the windows and enter the corridor.

In the remake, two zombies will be faced here. The door to the firearms room will be locked and requires a Old Key (Chris)/ Lockpick (Jill). 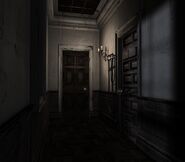 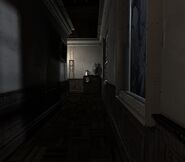 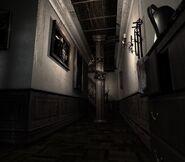 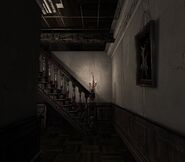 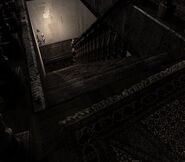 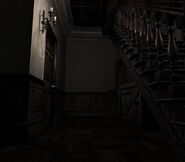 Retrieved from "https://residentevil.fandom.com/wiki/Spencer_Mansion/West_staircase?oldid=839071"
Community content is available under CC-BY-SA unless otherwise noted.