The West terrace (西テラス, Nishi terasu?)[1] is an area of the Spencer Mansion. The area was not featured in the 1996 original Resident Evil.

It is a balcony passage that connects the entrance hall to the second floor west staircase. The glass from the dining hall can be seen from here. There's a garden located at the midway of the balcony.

The west terrace can be entered through the 2F west staircase either using the Old Key (Chris's scenario) / Lockpick (Jill's scenario) since the entry from the entrance hall is locked from the other side. There are green herbs that are grown in a pot on the balcony, that can be used to restore health three times.

According to the memo that was found inside the mansion, an object was hidden within a dog collar, which is put on one of the mansion's guard dogs that used to hang around this area. To summon the guard dogs, the player can use the whistle. After several seconds, two Cerberuses will jump onto the balcony passage, wearing the dog collar. Player must kill the Cerberuses before obtaining the collar.

By examining the collar, the player can obtain a coin which, when further examined, will transform into an imitation of a key. This imitation can be used to replace the Armor Key , deactivating the trap in the statue corridor.

Before leaving the west terrace either using the door to the 2F west staircase or entrance hall, the player will be given the option whether to discard the dog whistle.

If the player returns to the area after obtaining the Helmet Key, two hunters will be patrolling the terrace.

From the 2F west staircase

The door to the Entrance Hall 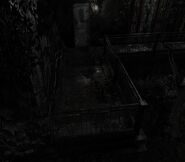 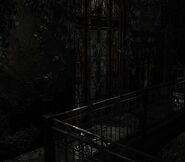 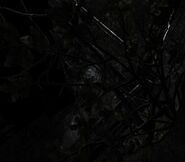 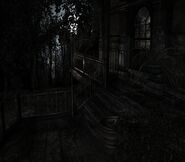 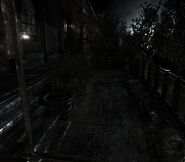 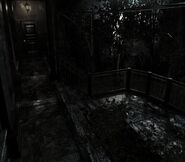 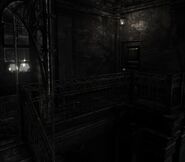 Retrieved from "https://residentevil.fandom.com/wiki/Spencer_Mansion/West_terrace?oldid=771911"
Community content is available under CC-BY-SA unless otherwise noted.