The Spencer Mansion was mansion in Arklay County, United States, several miles northwest of Raccoon City within Raccoon Forest. It was designed by George Trevor of Trevor & Chamberlain fame and completed in November 1967. Although officially serving as a country club for Umbrella Corporation executives and distinguished clientele, actual guests were rare if at all existent, and the mansion was primarily used as office space for the underground Arklay Laboratory complex, a top-secret facility used for the clandestine bioweapons research known to The Pentagon, with the mansion serving as a facade to hide the shipments of personnel and equipment in plain site.

In May 1998 the mansion was contaminated by an outbreak of t-Virus, the mind-altering effects of which led to a deterioration of authority as cannibalistic murders, animal attacks and shootings became commonplace. The facility was deemed lost in July after several attacks in the forest reached national headlines, and to cover-up the research the Umbrella-funded S.T.A.R.S. police force was sent in to destroy the facility during a police investigation of the area, accomplishing their mission on 25 July. Due to the restrictions imposed on the region by the US military and the CDC, no attempts since 1998 have been made to investigate the ruins.

The mansion was the brainchild of New York architect George Trevor, famous for his convention-breaking designs, such as labyrinthine floorplans and elaborate traps and locking mechanisms. When designing the mansion he drew interior inspiration from Lord Spencer's summer home in Europe. The designs changed several times, leading to several months of delays from its original start date of 21 March 1962, with construction beginning under a new firm recommended by Spencer sometime after 5 July.[1] Further alterations were made discreetly by Spencer and not made aware to Trevor, such as access to a mine hidden behind a garden feature.

Publicly, the mansion was to serve as both an American retreat for Spencer, as well as a club for distinguished colleagues in what would become Umbrella Pharmaceuticals. This was, however, a ruse to maintain the secrecy of Progenitor Virus, a retrovirus known only to a select few within Spencer's inner circle. Deeply paranoid, Spencer took up residence upon completion in November 1967 and invited the Trevor family to stay, at which point they were restrained, with George and Jessica Trevor dying soon after, and their daughter Lisa being kept on the premises as a test subject. Their abduction was successfully covered-up, with the family's unexplained disappearance as well known as Trevor's designs.

Thirty-one years later, there was an "accident" in the lab, and the latest strand of the t-Virus leaked, polluting the entire complex. All inhabitants, which included Umbrella researchers, were infected from the virus and were (due to the viral nature) degraded into zombies. Some who had yet to have fully succumb to the effects of the virus were killed either by suicide, by Umbrella's security team when trying to escape the mansion, or by the B.O.W's that had escaped their confinement.

It was revealed that Queen Leech, posing as the "resurrected" Dr. James Marcus, was responsible for the t-Virus outbreak that ravaged the mansion as an act of revenge against Oswell Spencer for having him assassinated ten years earlier, thus beginning the events of the Mansion Incident.

Some of the Umbrella staff members (like the Chief of Security, or Albert Wesker) saw this as an opportunity to eliminate Raccoon City's law enforcement, S.T.A.R.S. and at the same time, gain important combat data on the B.O.W.'s running loose in the mansion. There was a scheme to have S.T.A.R.S. members lured into the mansion. It was inevitable that S.T.A.R.S. would investigate the mansion as it was the center of the bizarre cannibalistic murders that took place in the suburbs of Raccoon City. This scheme had unfortunately proved to have had some success as much of S.T.A.R.S. Bravo team division were killed by these B.O.Ws.

The Mansion was later destroyed when surviving S.T.A.R.S. Bravo team member Rebecca Chambers activated the self-destruct sequence. Rebecca managed to escape the complex along with surviving S.T.A.R.S. Alpha Team members Chris Redfield, Jill Valentine, Barry Burton, and Brad Vickers via helicopter before the detonation of the estate. Albert Wesker was also reported to have survived the explosion, having become stronger using a prototype virus given to him by William Birkin.

Unlike more typical mansions, the Spencer Mansion did not conform to any particular set style, instead mimicking a variety of philosophies such as Regency and Second Empire. It should be noted, however, that Trevor was renown for his unconventional designs, and the mansion itself was inspired by the existing Spencer Estate.

The Spencer Mansion was designed in a U-shaped layout, with the south-facing entrance hall at the front and centre flanked by an east and west wing, which would wrap northwards around the grounds. The entrance hall itself was two storeys tall and served as a major thoroughfare, as typical with mansion designs. The second storey level encircled the room, supported by pseudo-neoclassical columns with an east–west bridge at the centre of the hallway. This hall was modified beyond Trevor's known plans, including a secret back door being a portrait and a gate under the stairs leading to the altar, something which was certainly not designed by Trevor.

The west wing consisted of a dining hall, a bar, a library, a greenhouse, a study, a bedroom and two storerooms. Connecting the entrance hall with the west wing was the dining hall itself, which was a rectangular room with the windows facing southward. A fireplace was at the west side of the room, above which the Spencer coat of arms was erected. On the northside of the room was a grandfather clock custom made to sit on a rail; if the clock was set to a certain time it would move to reveal a secret compartment. The bar war built as an entertainment room, having previously been planned out solely for playing music. On Spencer's instructions, a piano installed in the room was modified to open up a secret compartment in the room.[1] The greenhouse, which would peer into the compartment through a window, was where Spencer planned to grow his flowers. The position of the greenhouse is unusual in that there were no windows for natural light to enter. The library, located on the second and third levels, was where Spencer intended to place his scientific and other literature. Also on this floor was a study where two eagle statuettes were installed as a security mechanism. At the south side of the building was a large terrace which wrapped around the dining hall. This was made more expansive on Spencer's instructions his dogs have space to play.

The east wing consisted on the ground floor of a wider variety of smaller rooms, including two art galleries, the bathroom, a drawing room, a study and a dressing room. The smaller of the art galleries - formerly a drawing room - was where Spencer placed his "woman drawing water" statue, while the latter used a complicated light puzzle to open up a secret entrance to the garden. Between the two galleries was a room Spencer used for storing scientific equipment and research samples, itself leading on to a dressing room. This scientific exhibition is not named in Trevor's designs, leaving it possible he was not aware of its intended nature. One of the more dangerous traps devised by Trevor for the mansion was in a small chamber leading to "Drawing Room 2".[1] Were a shotgun removed from the wall in that drawing room, the shutting of doors in this room would trigger the ceiling to come down on the occupant and thus crushing them to death.

A the south side of the second level was the east-wing terrace, which continued along the east wing and part-way around the attic which was used for storage. This level of the east wing was largely for guests' recreation, with many of its rooms being smaller equivalents to those elsewhere in the mansion. It included a dining room, library and living room close to the guest rooms themselves. For recreation there was a gallery which housed Spencer's collection of Mediæval suits of armour, and another for art. This art gallery took the place of previously planned billiards room,[1] and was further modified to have moving walls as part of a booby-trap ultimately leading to a secret pit on the ground floor. This pit was not in Trevor's designs, instead being represented by a black void.[1] It was here there was a tombstone with Trevor's name on.

The basement level was designed as a particularly small affair. In the blueprints, a staircase from the west wing would lead directly into the kitchen. An elevator in the basement would provide quick access to the second level, just outside the library. From the kitchen a corridor would lead to the mansion's fuse box. In spite of this important task, the limestone-rich mountain rock made the basement a flood risk and, likely aware of this risk, Trevor talked with a local electrical company about installing safety devices.[1] In the completed mansion, this corridor also led into the east wing, directly beneath Trevor's tombstone. 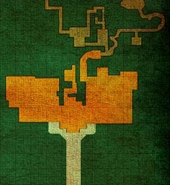 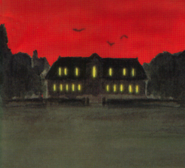 The front hall of the mansion.

The Spencer Mansion seen from afar.

Jill inside the dining hall. 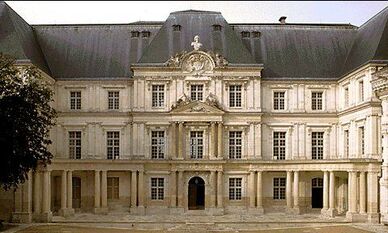 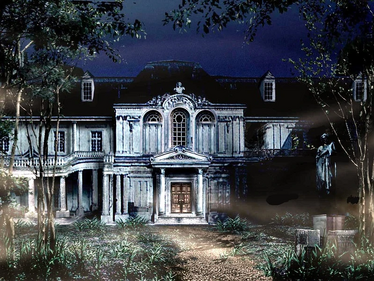