The Sub-Machinegun is available in Resident Evil 0 as an unlockable weapon. The likeness of this weapon is used as the Submachine Gun in Resident Evil: The Umbrella Chronicles.

The Sub-Machinegun takes up 2 spaces of inventory. Its ammunition is shown in a percentage starting at 100% when full and going down to 0% which is empty. Firing 3 bullets lowers the percentage by 1%.

Unique to this weapon, when the fire button is held and the character is shooting bullets, the player can then aim the weapon left and right to a certain degree (allowing the player to fire "sweeps" of bullets across the area). This can be done in all aiming positions; leveled, downward, and upward.

This weapon is aimed from the hip. Its stopping power combined with barrage of bullets can prevent a zombie from approaching as well as killing them.

The weapon itself can be found during Leech Hunter. It only appears during the pattern that includes two green herbs in the main hall. It will be found in the room full of Eliminators with 100% ammunition. 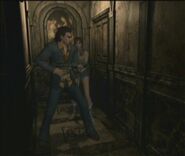 Retrieved from "https://residentevil.fandom.com/wiki/Sub-Machinegun_(RE0)?oldid=768217"
Community content is available under CC-BY-SA unless otherwise noted.