The Super Raid Festival (超レイド祭?) was an event held in Japan at the Nico Nico Super Conference 2015 in the Makuhari Messe convention center during April 25–26, 2015.[1] At Capcom's booth, the Level-Restricted Challenge No. 4 was playable and rewards were given to players who participated in the event, whether they were in Japan or playing the event online through RE.NET.

At Capcom's booth, the PS4 version of Resident Evil: Revelations 2 was playable with the Level-Restricted Challenge No. 4, enemies in this stage were at LV. 120, the highest enemy level available and only seen during this event. The stage was Raid Mode Ⅲ-05 (prison) on Code Red difficulty and the objective was to kill all enemies until a key is given, kill the Executioner then hit the golden medal to finish the mission without dying.

The playable characters in the event were Claire, Barry and HUNK, each at LV. 100 and with different weapons, parts and skill sets.[2] None of the members of the development team were able to complete the mission, and out of all participants that attended the event, only 12% were able to finish it (10 Barry, 1 Claire, 1 HUNK).[3][4] Because of this, the Natalia (Super Raid Conqueror) RE.NET reward was unlocked if the player finished the mission at LV. 88 or below, which is the max level number (100) subtracted by the survival rate during the live event (12%).

The event was streamed live at the CapcomChannel.[5] 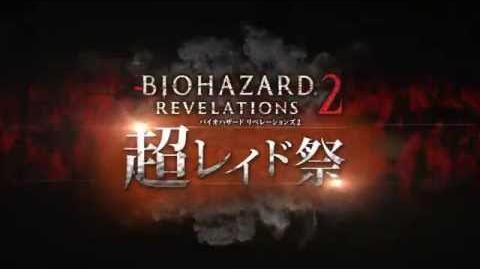 Retrieved from "https://residentevil.fandom.com/wiki/Super_Raid_Festival?oldid=745877"
Community content is available under CC-BY-SA unless otherwise noted.