Cloning
T-00 was a Tyrant sent into Raccoon City during the 1998 Raccoon City Destruction Incident. T-00 was one of six within the T-103 series that were airlifted into the city, and was given instructions to recover a G-Virus sample from the pendant of Sherry Birkin and kill any surviving officers and civilians found in the Raccoon Police Station [1] where it began a hunt of Leon S. Kennedy and Claire Redfield who were trying to escort Sherry to safety.

Umbrella's control over the outbreak in Raccoon City ended with the collapse of the UBCS as an organised force on the night of 26 September, and under Article 12 of Umbrella's Internal Emergency Procedures Col. Sergei Vladimir was given command of all remaining personnel.[1] On the night of 29 September, T-00 and five other T-103 Tyrants were flown over the city in an SH-60B Seahawk to take part in new missions. While five were sent to Incineration Disposal Plant P-12A to fight the Delta Force operatives present, T-00 was given two unique missions.[1] Firstly, it was to eliminate any survivors in the Raccoon Police Station, which Umbrella could not verify had already fallen. Second, it was to locate a sample of the Golgotha Virus and return it to a designated pick-up point.[2][excerpt 1]

Either dropping into the police station or landing close by,[3][4] T-00 was successful in entering the building. By this point most police officers had already mutated into Zombies, and T-00 encountered only a handful of survivors. Accounts differ as to the exact events in the station, and it is possible it was responsible for the death of journalist Ben Bertolucci. Other accounts suggest T-00 was struck with a van, or even torn open by Dr. William Birkin, who had transformed himself into a disfigured monster with the G-Virus. What is known however is that T-00 abandoned the police station and began a search of NEST for Golgotha. There, T-00 was injured, either by fire or by molten metal. These extensive injuries triggered the de-activation of its Power Limiter, allowing it to mutate into its Super Tyrant form. T-00 fought RPD officer Leon S. Kennedy, but was ultimately killed when he fired a rocket at it from a M202 Flash.

Archives page on the Tyrant.

T-00 Breaks through the Conference room.

Attack in the lab.

in The 4th Survivor.

T-00 chasing Leon and Claire through the Police Station. 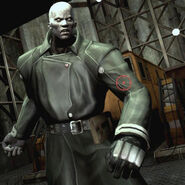 The T-00 attempting to reach Claire and Sherry

The T-00 in its Super Tyrant form.

Render of the Super Tyrant

Close up of the Super Tyrant's face 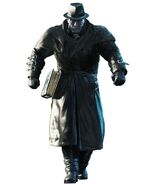 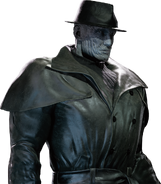