Rated 9+[3]
TEPPEN is a mobile franchise cross-over game by Capcom and GungHo.[1] It features Albert Wesker, Jill Valentine and Ada Wong as Hero characters and multiple cards which feature characters, creatures and items from the Resident Evil franchise.

Wesker fights the following opponents during his story: X, Nergigante and Chun-Li.

The introduction scene is somewhat of a recreation of the Dreams of a Madman cutscene in Resident Evil 5, Wesker is present at a mansion with Ozwell E. Spencer who tells him of his plan of reigning over a new breed of humans, when Wesker kills Spencer by thrusting his fist through the old man's chest, X is seen behind him and a battle is started.

Afterwards, it is shown that Wesker left the mansion due to the new power he "stole" from Spencer, which is Uroboros. This power seems too great for Wesker to handle, it's stated that it was consuming him and Wesker could even feel death looming over him.

Nergigante then appears and shoots spikes towards Wesker, which then grew back on the dragon's body. This leads to their fight, but Nergigante's attack gave Wesker an idea. In order to keep Uroboros under control, Wesker would need to replace his body with a new one.

He found a nearby village and ensued chaos in search for the vessel. Chun-Li was in the vicinity and fought Wesker in order to protect the people.

Wesker then decided to change his approach, instead of chasing down a vessel himself, he'd pit potential subjects against bio-weapons, he opened an underground tournament called "Survival of the Worthy" in order to mask his true intentions behind entertainment.

When a Mysterious Girl approached him as he was watching the show, she stated that the vessel he needed is in the "Land of Illusion", while Wesker noticed her true aim, he found he might be able to use her, as such, he left the place and headed toward the Land of Illusion.

Jill Valentine was added as part of the August 2019 update.[5] She fights the following opponents during her story: Chun-Li, Rathalos and Wesker.

The first cutscene depicts Jill's desire to take down Umbrella and Wesker after the events of Resident Evil. She finally gets a lead, which was the "Mysterious Girl" who had been somehow linked to Wesker, as Jill was approaching the hooded figure, Chun-Li blocks her path and states that the woman is innocent. Jill threatens Chun-Li, all the while the woman smiles in the background.

As the two were fighting, the woman tried to escape. Jill ran after her but the floor started to collapse behind her as she was making her way up a set of stairs, Chun-Li was left behind in the falling debris. Just as Jill was about to make a move on her target, the woman suddenly lifts herself into the air, she used a wire attached to a wyvern. The woman got away, while Jill had to deal with Rathalos by herself.

Rathalos' attacks were so powerful that the building Jill was in started to be torn apart, as the floor started to shake, Jill jumped out to safety. When she landed, she watched the building being hit by Rathalos again. However, zombies were present in the area, she charged through them, shooting what she could.

"Miss me?" - the man she had been looking for spoke to her, Jill raises her weapon towards Wesker and the two fight. Jill unloaded everything she had, but Wesker remained without a scratch. As Jill shot her last bullet, Wesker spawned Uroboros out of the floor to deflect the incoming fire, he then stated "We finish this in the Land of Illusion" and gets away, leaving Jill trembling. The next morning, Jill prepares herself to go to the Land of Illusion as she has no other choice, her old allies deserved justice.

Ada Wong was added as part of the March 2021 update.[6] She fights the following opponents during her story: Wesker, Zero and Felyne.

It is stated that Ada was hired to obtain two samples of an ancient civilization's advanced technology. During her mission, she found Wesker who she sparred with, however, Wesker eventually let her go because "he too was using her".

When Ada was searching the ruins of this ancient civilization, she eventually found a dim of light on the walls, this glow came from a capsule that was still working. It was revealed that Zero was inside the capsule and attacked Ada upon spotting her.

Just as when she was starting to struggle, a strange relic started interfering with Zero, rendering the robot motionless. Ada picked up the relic and was able to manipulate him into sleeping again.

At this point, Ada needed one more item to complete her mission. She left the ruins and arrived at a forest where she stumbled across a Felyne who was holding a treasure - the item she had been looking for. The Felyne was not so cooperative - and the two fought over it.

Ada was able to steal the treasure from the Felyne, and leapt through the air, supposedly using her Hookshot. She goes back to her employer with a false display of loyalty. She donned the black robe and started making her way to gather all of the other heroes (playable TEPPEN characters) into the Land of Illusion for reasons unknown.

ALBERT WESKER - Resident Evil
Known for his medical breakthroughs at a large corporation, Wesker was also secretly developing biological weapons. He works in the shadows to accomplish his mission, ensuring nobody else will uncover [sic] his secret.[7]

JILL VALENTINE - Resident Evil
Jill was part of a special operations task force that was taken down by a traitor within its ranks. She sets out after the traitor and the association behind the incident, but it leads to the creation of an all-new nightmare.[8]

ADA WONG - Resident Evil
An elusive spy whose intentions and true identity remain a mystery. She carries out her work with an almost clinical detachment. Having cast off her black robe, she appears before the heroes as her secret plan enters its final stage.[9]

The following cards can be discovered by using [Explore], discovered cards can only be used on the current battle.[10]

The following cards can be discovered by playing other cards, discovered cards can only be used on the current battle.

Adventures of a Tiny Hero Pack

Note: All of the Flavor Texts in this expansion are told from the perspective of Felyne.

Ace vs. The People Pack

These soundtracks can be purchased in-game with "Souls" and can be selected for the background music during matches. 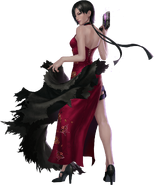 Albert Wesker during a battle

Merchant in the Store screen