Resident Evil 4
The TMP is a special weapon featured in Resident Evil 4. It also has a purchasable stock that makes it easier to aim. The TMP is also upgradeable which players can enhance its performance to face tougher enemies.

In the main game, the TMP can be bought from the Merchant as soon as they meet him. It costs 15,000₧ in the GameCube's US and Japanese versions but only 10,000₧ in the PAL version and all later ports. The weapon takes up 6 spaces (3x2) of inventory. It fires its own type of 9mm rounds called TMP Ammo, which is identifiable by its blue box.

A custom stock can be equipped to the TMP. It is available in Chapter 1-3 and onwards for 4,000₧. The stock takes up an additional 4 spaces (2x2). The stock reduces recoil and improves accuracy.

Without the stock mounted, the TMP is fired from the shooter's hip, resulting in poor accuracy, while the stock allows the shooter to shoulder the weapon, resulting in a noticeable increase in accuracy and making it easier to control the weapon's recoil. The stock also allows the player to aim over obstacles that would normally obstruct the TMP's fire when aiming from the hip.

The TMP is the only fully automatic weapon available at first, making it useful to attack multiple enemies. Its drawbacks are the very weak firepower and stopping power and its ammo is uncommon. If the player is not careful, they could use all ammunition very quickly. Also, the laser is hard to keep track of while firing full-auto.

The TMP is a weapon most useful when dealing with mass amounts of Ganado attacking the player. Its fast fire rate allows the player to clear out most, if not all, enemies in the area.

Ada Wong is seen using this weapon in a cutscene. Krauser uses a slightly customized TMP (that is capable of destroying the cover lining the area) during his fight against Leon.

The TMP also appears in Ada's inventory in the Assignment: Ada minigame, and is also purchasable during Separate Ways. Also, in a cutscene, Ada sees Leon fighting a group of Ganado with a TMP in the room with the rocket launcher on display before he meets up with Luis Sera, even though it is completely optional for the player to do so in the game.

In the Mercenaries minigame, Ada again has this in her inventory. A different version of the weapon, called Custom TMP, is used by HUNK in the minigame. The TMP is also featured in the Rapid Fire weapon set in the Shooting Range minigame.

The TMP without optional stock.

The TMP from the beta. 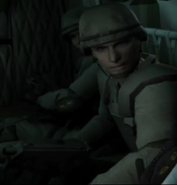 A Biohazard Soldier wielding a TMP in Umbrella Chronicles.

The unusable TMP with wooden grips on display in the Shooting Range.

The TMP with Stock

Ada holding the TMP in Resident Evil 4, 2007 PC Version.
Add a photo to this gallery

Retrieved from "https://residentevil.fandom.com/wiki/TMP?oldid=843184"
Community content is available under CC-BY-SA unless otherwise noted.