The Tactical SMG is a weapon that appears in Resident Evil: Operation Raccoon City. It was first revealed on the website for the Kendo Gun Store, which can be found though the Inserted Evil minigame.

The Tactical SMG can be purchased using [5000 XP] from the pre-game menu. It has the most power among the Submachine Guns, and above average range and accuracy, but also has the lowest fire rate among the Submachine Guns. It has a 25 Round Magazine with a maximum reserve of 175 rounds. As with all Sub-Machineguns, it is advised to burst fire to increase accuracy while also conserving ammunition. 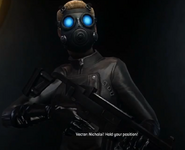