Tahir Kapoor was a security guard employed by Marhawa School.

Mother Gracia took Tahir and Ray into Marhawa School when they were children. Feeling indebted to her, Tahir became a security guard while his best friend Ray Hsu became a teacher.

Tahir and Ray assisted Doug Wright when he and his nephew Ricky came to Marhawa School on behest of Mother Gracia. Tahir was forced to put his friend Ray out of misery when he was infected with C-virus. Unfortunately, the group was attacked by C-12, a prototype Lepotica which, in reality, was Nanan mutated by the C-virus. His arm was crushed as he was kissed by Nanan, infecting him with the virus. Knowing that he would turn into a zombie, Tahir begged Ricky to shoot him. 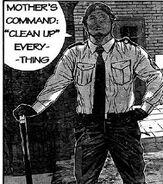 Retrieved from "https://residentevil.fandom.com/wiki/Tahir_Kapoor?oldid=811275"
Community content is available under CC-BY-SA unless otherwise noted.