Download
The Ghost Survivors is one of the DLCs for 2019's Resident Evil 2. It was released for free on February 15, 2019, acting as a series of "what-if" side-stories for the characters of gunstore owner Robert Kendo, the mayor's estranged daughter Katherine Warren, a U.S.S. member codenamed Ghost, and Sheriff Daniel Cortini, exploring the various scenarios in which they survived the events of the main game.

The Ghost Survivors follows a non-canon storyline where each campaign is set as an "what-if" scenario.

In Kendo's No Time To Mourn scenario, he is seen pointing a gun to his head in front of his deceased daughter, Emma Kendo. Before Kendo pulls the trigger, he receives a call from a friend who states he's got a helicopter and asks Kendo to come to the rendezvous point. Kendo is able to arrive at the destination, and leaves Raccoon City safely on the helicopter.

In Katherine Warren's Runaway scenario, Katherine is able to fight off Brian Irons at the Director's Room and even manages to kill him. She starts making her way to the Jail at the Police Station's B1 floor, it is then revealed that her plan all along was to free Ben Bertolucci, who apparently she has an affection with.

In Ghost's Forgotten Soldier scenario, it's revealed that when Ada falls down the shaft, the G-Virus sample also fell and ended up on the hands of the U.S.S. member simply known as "Ghost". With his objective now complete, Ghost sets out to leave NEST, however, upon reaching the cable car, Ada Wong appears behind him, pointing a gun to his head and taking back the sample.

In Daniel Cortini's No Way Out scenario, the Sheriff is able to kill the attacking zombie at the Mizoil Gas Station, but multiple zombies start raiding the gas station and Daniel tries to survive for as long as he can. Eventually, Leon Scott Kennedy arrives at the scene and helps Daniel, the two then leave the place on Leon's car.

In No Time to Mourn, Runaway, and Forgotten Soldier, each character's task is to reach a dedicated destination by either eliminating or dodging all threats in between. Many areas of the map are blocked off or overrun with large hordes of enemies, making a direct route unviable and forcing the player to journey over a longer distance. No Way Out requires players to kill a wave of 100 zombies inside the confined space of the gas station as they gradually enter the building through three entrances.

There are various items that can be found within The Ghost Survivors mode, either by picking them from item dispensers (which are not present in No Way Out) or by eliminating special zombies carrying backpacks.

In the beginning, only three of the four scenarios are available. Once the player has successfully finished Robert's, Katherine's, and Ghost's scenarios regardless of difficulty, Daniel's scenario becomes available for play.

No Time To Mourn (Robert Kendo)

The objective of Robert's scenario is to traverse from the Gun Shop Kendo to the rendezvous point at the Proposed Water Purification Room located inside the sewers to escape by helicopter extraction. During the mission, the player will encounter poison zombies.

Robert's destination is marked on the map via a helicopter symbol.

Katherine's objective is to make her way from the orphanage to Ben's cell located in the Jail area of the Raccoon City Police Department in order to rescue him with the cell key she obtained from Brian Irons. During the mission the player will encounter Pale Head zombies.

Katherine's destination is marked on the map via a lock symbol.

The mission objective in Ghost's scenario is to escape via cable car with the G-Virus sample which he retrieved in NEST. His escape route leads him to the cable car platform. During the mission the player will encounter A-Gear zombies and the Tyrant.

Ghost's destination is marked on the map via a cable car symbol.

No Way Out (Daniel Cortini)

While being trapped inside the Mizoil Gas Station, Daniel's objective is to eliminate 100 zombies (70 zombies on Training Mode) who enter the shop in waves until he can escape with the help of Leon.

To keep track of the number of defeated enemies a dedicated red skull icon will be shown on the player's screen alongside the number.

Each of the four characters features two different load-outs depending on the selected difficulty:

The Ghost Survivors introduces new types of zombies outside of the main game. No Time to Mourn, Runaway, and Forgotten Soldier have one of the new zombie types and a note found at the beginning of each of these scenarios explains them to players. In No Way Out, all three of these zombie types appear.

No Time to Mourn features Poison Zombies, whose bite will put the player in poisoned status. They expel a toxic cloud when killed, which will also poison players too close to its release. 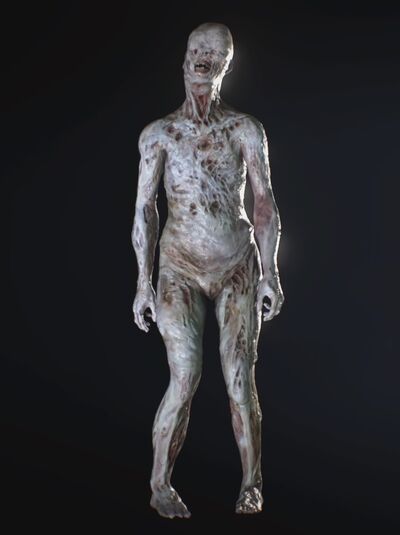 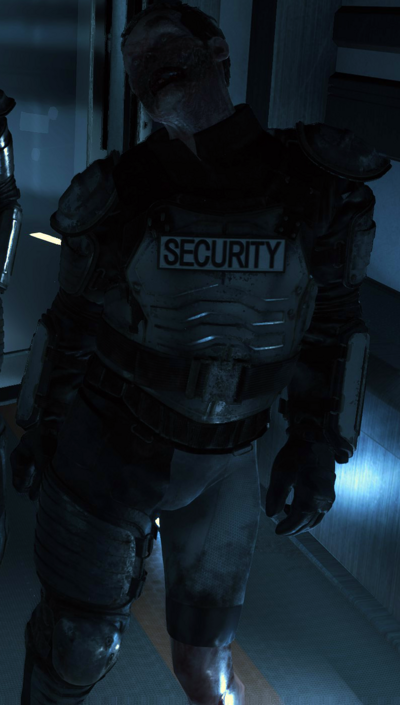 In addition to these enemies, No Way Out features enemies who function as both poison zombies and A-gears. As such, they are capable of poisoning the player and avoiding damage to their armored areas.

Throughout the scenarios of Robert, Katherine, and Ghost, the player will find item dispensers. 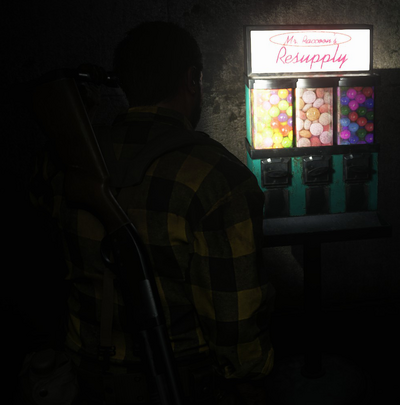 Interacting with one of these machines will grant the player to choose an item from a total of three. 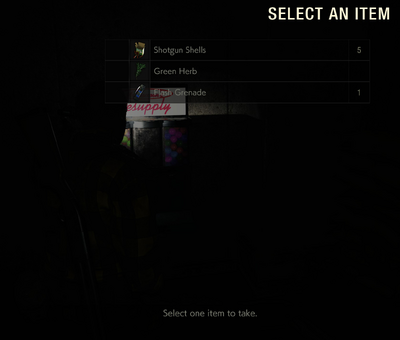 Once an item has been taken out of the item dispenser the remaining items become unobtainable for the current playthrough.

During each playthrough, the player will encounter zombies carrying backpacks. 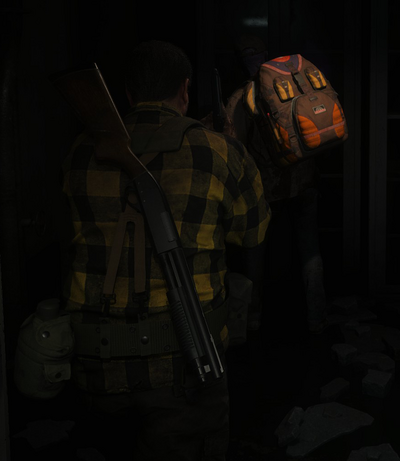 Once a backpack has been discovered by the player its location will be marked on the map by the icon below:

In No Time to Mourn and No Way Out, the player will encounter zombies carrying a gas can in their backs. 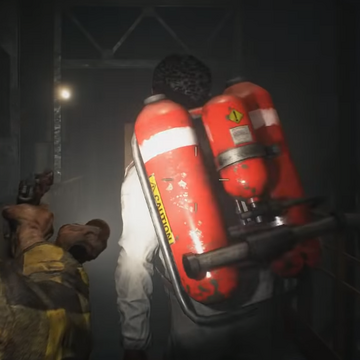 Shooting the explosive gas can will cause it to explode, killing the zombie instantly along with the other zombies near its blast radius. Alternatively, if the zombie is knocked down or killed without the gas can going off, it will fall from the zombie's back and can be used to eliminate another set of enemies.

By completing various Records, the player can obtain up to 15 different accessories which the main function is solely for decorating the characters. For further information please visit the dedicated accessories section. Completing these records also unlocks RE Points and icons on RESIDENT EVIL.NET, for a complete list of these, see the Records page. 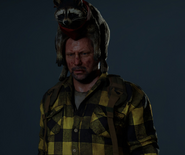 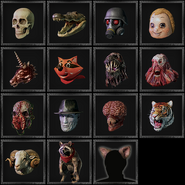 All accessories available in The Ghost Survivors

However, after completing the Gunslinger record, the player can obtain the Cat Ears accessory which grants ∞ ammo. 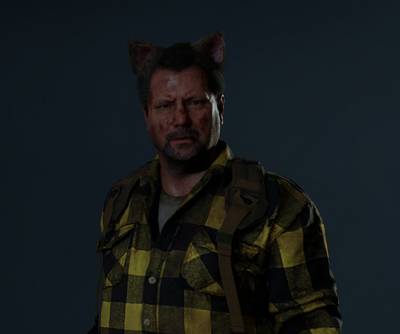 After equipping the infinite ammo accessory, the player receives a notification to inform that while under the effect of infinite ammo, the player's high score will not be updated as long as the Cat Ears are equipped. 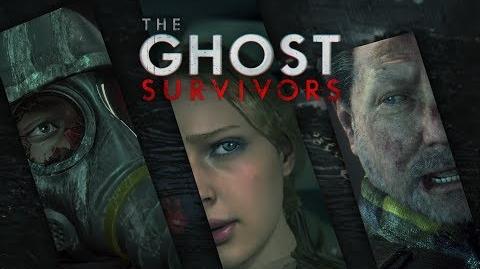 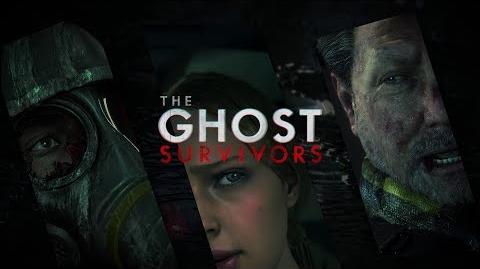 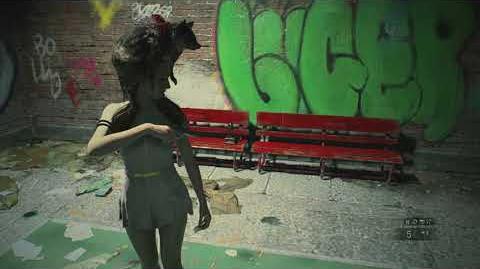 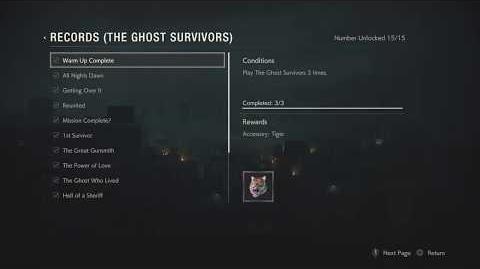 RE2 - All The Ghost Survivors Records
Full list of records