watch 03:03
The Loop (Games)
Do you like this video?
For the Umbrella Corps map, see Village (map).

"The village" is an unnamed community located in a mountainous and rural area of Spain. The region was clustered with lakes and rivers, and its economy until the twenty-first century was built on farming and coal mining.

Until the Early Modern period, this region was home to a religious group known as Los Iluminados, which worshipped parasites known as Las Plagas. The cult was destroyed in a Catholic crusade led by a nobleman, Salazar, whose family administrated the region for generations from a nearby castle.[note 1] Local village matters, however, were handled by a village chief. The villagers adopted a culture of preserving their lifestyles through generations, and restricted their use of modern technology. By the twenty-first century, they lived in an anachronistic life some two centuries behind the rest of Spain.[1][2] At some point at the start of the twenty-first century, Ramón, the 8th lord, was converted to a neopagan religion taking the features and name of Los Iluminados, and was followed by Fr. Bitores Mendez, the village chief and Catholic priest. The leader of this neopagan group, the Prophet Osmund Saddler, succeeded in obtaining samples of Las Plagas for bioweapons research, and created a new subspecies of parasite that would command the others. The villagers were then converted to Los Iluminados through Fr. Mendez, and willingly accepted Plaga parasitisation through the guise of an elaborate baptismal ceremony. Now loyal to the Prophet and under his direct control when in his presence, the villagers followed orders from the Prophet and Fr. Mendez almost without question, and began murdering outsiders, who Saddler feared were spies. Following the death of Osmund Saddler at the hands Leon S. Kennedy, the village area was completely sealed off by the Spanish government to prevent surviving Plagas from spreading, though refugees who fled from Los Iluminados were parasitised when they returned home.

The western Footpath to the village begins just after a river crossing against don Jose's isolated premises. It goes downwards into a small valleyside where another river runs through on a dissimilar path. There are two sheds along this route, one of which was where a local villager was killed and left hanging inside. This area was booby-trapped with tripmines and bear traps.

The village features homesteads, a Farm compound, a Church with a cemetery, and a tall bell tower within the community itself. There appear to be several fortified Ganados encampments located near the village while an underground bunker complex has also been occupied and used to store weapons and equipment. Most villagers live in the village, although a few villagers tend to live further away from the main, central area of town. For example, the first house in the game seems to be closer to the border of the village, requiring a villager to take a path to the village and the outlying areas. An unseen villager also lives in a house next to the lake, when Leon kills Del Lago he passes out in this persons house. There is also an abandoned cabin across the bridge near the farm where Leon, Ashley Graham and Luis Sera take refuge in during a villager mob attack.

This path is beyond the farm, where a long curved hill leads downward to a tunnel with a bridge above (the bridge for the Northern path). On the other side lies a yard with tipmines and bear traps, and a lot of trees. The yard contains a run-down shed, a small house with a tightly nailed door and finally a large house, riddled with tripmines and at the end of the house is a room with a few cabinets and a closet where Luis Sera is being held captive prior to Leon's arrival.

The southern path leading away from the village leads to the homestead of Bitores Mendez, the village chief. An exit leading out of his bedroom in the rear leads to an underground corridor at the bottom of a well. The corridor eventually opens out in another valley, which was being used as a prisoner compound for Leon and Luis.

This easterly path is taken by traversing an underground passage from a small building in the village centre. It surfaces in the Church cemetery, where a short walk uphill and past the church goes much further. A walkway against a cliffhedge overlooking a large lake leads travellers easterly towards a flat, rocky plain with high wooden fencing blocking off the drop down the cliff. A mine against the upper-cliff was used for hiding away an "El Gigante" until its release was ordered. After this area is a shallow marshland with a raised, wooden walkway going down the rest of the area. After this is the shoreline of a smaller lake that feeds the larger lake below. Going south via the lake and down a cliffedge, a complicated machine for changing the distribution of the river water can be used to reveal an underground passage through the cliffs. This passage leads to another, underground lake where a boat can be taken back to where El Gigante is released.

This path is north of the farm and where a bridge leads across to a cabin (as mentioned above). Followed by two routes, one is a compound where two towers are seen and it features an arena where Leon runs into the Chainsaw Sisters. Beyond that door is a compound with a basement in which a path is caved in, ahead lies the two towers and a pair of red double doors at the end. The other route, is a lengthy path leading to a pair of green double doors. An El Gigante is seen there in the game. Afterwards, there is a porch near the latter of the two routes and a shed. Beyond there lies the gate leading from the village to the Castle. To open it, one needs to use a False Eye possessed by the village chief. North of there is a lift that leads to a tunnel which at the end of it is a Yellow Catseye, a control room for the lift is also present next to the lift. Down the stairs leads to a gate, beyond it is a warehouse that possesses several supplies and it is the stage to fight the Village chief. 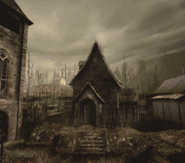 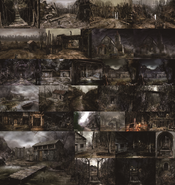 Retrieved from "https://residentevil.fandom.com/wiki/The_village?oldid=842873"
Community content is available under CC-BY-SA unless otherwise noted.