Resident Evil Wiki
Register
Don't have an account?
Sign In
Advertisement
in: Umbrella employees, End of the Road characters
English

Tommy Nielsen was an Umbrella executive in charge of a cargo dock which supported the covert transportation of bio-weapons along Raccoon City's rivers.

During the Raccoon City Destruction Incident, Nielsen was ordered by the corporation to remain in the city and conduct an operation to reclaim cargo stolen from his dock. Worried about the incriminating nature B.O.W.s recovered from an Umbrella dock, Nielsen was charged with the elimination of the thief, Captain Rodriguez, and anyone seen helping him including women and children.[1]

On October 1, Nielsen took command of Arnold's UBCS team and had them plant landmines in the streets around Rodriguez' helicopter, while a missile launcher was delivered by truck to a warehouse building to be used as their base of operations. 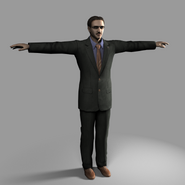