Tony was an officer of the Raccoon Police Department who operated in the K-9 division as a police dog handler. He was one of the last surviving handful of officers barricaded within the police station on September 28.

As a last surviving member of the RPD, Tony was involved in Marvin Branagh's final escape plan regarding escaping through the vent shaft system. As a member of the K-9 division, he informed the survivors that he would be bringing the dogs to the evacuation point in order to save them. The dogs, however, were already infected with the t-Virus and mauled Tony close to death before he managed to escape.  Officer Kevin Ryman finds him mortally wounded in an empty pen and speaks with him before Tony ultimately dies of his wounds.

Tony can be unlocked along with Fred, Andy, and Jean in an NPC character set simply by beating the "Desperate Times" scenario on any difficulty with any character and purchasing the set for 5000 points in the collection menu. He can be used in File #1 by using File #2's Data Convert feature.

Tony speaks with the survivors. 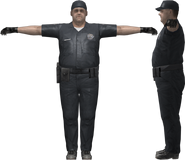 Tony's character model.
Add a photo to this gallery

Retrieved from "https://residentevil.fandom.com/wiki/Tony?oldid=753739"
Community content is available under CC-BY-SA unless otherwise noted.