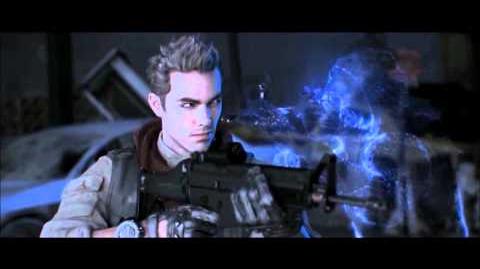 Triple Impact is a trailer for Resident Evil: Operation Raccoon City that was released on January 9, 2012. It is notable for fleshing-out the US military's special forces.

Party Girl, the brunette rifle(wo)man, notes the bloody mess left behind; "looks like we missed one helluva party." A body she is looking at suddenly rises up and tries to kill her; luckily, it was trapped by a car collision and so can only move its upper body. Shona, the African team-member, decides to "[take] a specimen while it's still fresh." It is not shown what he specifically meant, as the scene cuts suddenly to the USS' Wolfpack team.

Christine Yamata (Four Eyes) is taking a viral sample from a living zombie (indicating that she is doing the same as the SpecOps member) in an alleyway. Her team members radio that their targets are on the move; two Raccoon City police officers run past her as her teammates shoot. Karena LesProux (Lupo) advises Four Eyes that it is "no time for samples". Vector and Lupo exit onto another street and continue to follow the survivors.

Cutting back to Echo Six, Party Girl hears gunshots and orders her team to check it out, believing it to be from armed civilians. They break into an apartment building and Willow inadvertently stumbles onto the hunting spot of a Licker. The creature steals her rifle with its tongue before pouncing. She takes out her combat knife and duels with it, severing its tongue before killing it with a stab to the chest.

Meanwhile, Lupo orders Hector Hivers (Beltway) to cut off the targets' escape. He complies by arming a sensor-triggered mine by the roadside. Lupo then orders Vladimir Bodrovski (Spectre) to "take them out" from his encampment in the rooftops, above. He succeeds in shooting one officer in the leg, but fails to shoot the other man, who instead triggers the mine and is killed in the explosion. The remaining officer gets up just as Michaela Schneider (Bertha) prepares a brutal smash with a machete, and escapes down another alleyway and into a car park. To dark to see, the team is unable to find him. Vector notes that the officer's continued bleeding will "attract the entire neighborhood" of zombies. Lupo quietens the team, as she can "hear him". Moving her torch, she finds that the sound is instead coming from a zombie. As the team is surrounded by the oncoming horde, she spots the target escaping through a door way, and the team follows.

Back with Echo Six, Party Girl leads the team outside from a second-floor building via the debris onto a street outside of a Stagla. The team spots the police officer on the run, and see WOLFPACK surround him. Dee-Ay demands that the agents identify themselves, identifying them as being of some unknown military (or paramilitary) organization. Vector uncloaks next to him, pointing a gun at Dee-Ay's head; he warns him not to "take another step". With Dee-Ay at gunpoint, Lupo finds it safe to kill their target. Vector then proceeds to shoot the SpecOps member, but Dee-Ay escapes his line of fire just in time and knocks him to the ground. The two begin fighting until Vector re-cloaks. With Vector safe, Lupo orders her team to kill the SpecOps team. They all duck for cover in time to escape the initial wave of fire.

Covering behind a car, demolitions expert Tweed forces WOLFPACK to cover as she fires at them with a machine gun while on her way to Harley's safer cover behind a van. In the firefight, Dee-Ay shoots Beltway in the shoulder; he responds by throwing a grenade back. Dee-Ay notices the grenade under his vehicle cover just in time to escape the resulting explosion, but is thrown to the floor. Getting up, he is attacked by a zombies, but manages to turn it around and use it as cover from Spectre's fire, rejoining Echo Six behind the van. They decide that they need to flank the still-unidentified enemies, as simply firing from their cover will not do. They are then bombarded by pheromone canisters, which Shona deduces as such when zombies begin to approach them. WOLFPACK takes advantage of the zombies' attention to the SpecOps team by walking with the zombies through the STAGLA station; Willow is seen slaying zombies with her combat knife while this happens. As WOLFPACK approaches, Four Eyes receives word that a T-103 is approaching.

The Tyrant breaks through a barricade by ramming a car through it, sending it rolling through the station and into a street sign, which falls over, knocking Lupo to the floor. As she gets up, she notices the Tyrant behind her, which prepares to attack. She is thrown by the creature into a car next to Dee-Ay. Meanwhile, Bertha and Harley begin fighting next to a truck, and Beltway blows up zombie heads with grenades (a la Chris Redfield). The Tyrant picks up a car and throws it directly at Dee-Ay. The scene then abruptly cuts to the game's title.

Retrieved from "https://residentevil.fandom.com/wiki/Triple_Impact?oldid=797328"
Community content is available under CC-BY-SA unless otherwise noted.