Start a Wiki
watch 01:25
What is Tyrant?
Do you like this video?
Prime universe
(Capcom's primary storyline)

A Tyrant is a human bio-weapon created through either a primary t-Virus infection to create a weapon, or the cloning of such specimens. Umbrella USA pioneered research on human mutants from 1988-1998 in their Tyrant Project, named after the virus itself. Tyrants are distinguished from the typical human mutant, Zombies, by possessing certain genes relating to intelligence. Tyrants were intended to be the "ultimate bio-weapon" for military use due to this intelligence. Ultimately, specimens and research outlived Umbrella itself.

The Tyrant Project began in 1988 with the intent on creating an advanced Bio Organic Weapon for military use. Due to the t-Virus' typical affect of brain matter necrosis, the number of successful B.O.W.s was limited, with the Cerberus Project and Hunter Project being the most successful. This led to Umbrella USA and Umbrella Europe taking alternative research paths, with USA focusing on creating physically powerful B.O.W.s, and the Euoprean continent focusing on preserving intelligence.[1] The Tyrant Project would have, theoretically, bridged that gap in creating a human bio-weapon of like or near-human intelligence, possessing great physical strength while still being able to interpret a wide array of commands.[2] Research by the staff at the Arklay Laboratory determined that in order to experience mutations of this scale the test subject would require certain genes relating to intelligence, which were found to change how the t-Virus would mutate a person.[1] Such people were projected to be statistically uncommon at one in ten million. Consequently, the Tyrant Project had to be delayed while a new strain of t-Virus was engineered which would expand the number of genetically-compatible test subjects.[1]

The Tyrants finally entered prototype production in the late Spring of 1998, when the ε strain was completed. The virus was capable of causing mutations at a much faster rate than previously seen and could greatly increase the subject's size and strength. However, the trade-off was that the rapid physical changes were potentially fatal, and a test subject could die in the process.[2] The R&D team were able to arrange for a number of convicts to be shipped to the Arklay Laboratory for use as test subjects, and testing began.[2] How many took part is uncertain, though as the three surviving Tyrants were numbered T-001, T-002 and T-011, there could have been as many as eleven participants. By carefully infecting the body parts of compatible subjects and performing surgery where needed, the Tyrant Project team was able to ensure a largely successful development. Work on the T-001 was abandoned when it suffered from mental degradation, which the R&D team concluded was the result of administering too high a 'dose' of t-Virus, also leading to dermatological necrosis.[3] This oversight otherwise helped the R&D team in perfecting their technique in creating the T-002 and T-011. When the Arklay Laboratory experienced an outbreak of its new virus, a cloned embryo of T-002 was developed and evacuated out for further research to avoid any risk of the Tyrant Project being a waste.

With the creation of the first Tyrants and the ε strain, Umbrella finally gained the ability to mass-produce B.O.W.s. Most new Tyrants engineered after the start of the Mansion Incident were modified clones of T-002, though there were other parallel developments. Umbrella had considered alternatives to the Tyrant Project early on, such as the Talos Project, which was to pioneer computer-controlled B.O.W.s to solve intelligence problems. The T-011 was evacuated from the Arklay Laboratory in July 1998 to take part in this project. A low-cost alternative to the Tyrant Project was the Bandersnatch Project , which created human weapons based on those without adequate genetic compatibility for practical reasons, though these creatures suffered from underdeveloped limbs.

Work on genetically engineering Tyrant clones began almost as soon as the embryonic clone of T-002 was evacuated from the Arklay Laboratory. By 23 July 1998, the first T-103 Tyrants were created, with both a standard mass-production type and a modified "Ivan" version for use as a bodyguard to Umbrella executive Col. Sergei Vladimir. Mass-production of T-103 clones took place on Sheena Island from August at the latest. From this month, successors to the T-103 were also in development, with the one-of-a-kind Thanatos, Tyrant C and Tyrant R being developed within Raccoon City separately. Work also took place to create the Nemesis-T Type, a T-103 with its brain replaced by a Nemesis Alpha parasite. The Nemesis Project was a 1980s alternative to the Tyrant Project, developed to replace the inadequate brain of its host.[1] With the creation of a combined being, the effectiveness of the Nemesis parasites could be tested in combat.

Raccoon City saw significant use of the Tyrants during its September t-Virus outbreak. At least six standard T-103s, Nemesis-T, Thanatos, Tyrant C and Tyrant R saw action during the outbreak. Five T-103s were sent out to Incineration Disposal Plant P-12A to counter a Delta Force operation,[4] with the sixth being sent to the Raccoon Police Station to verify the eradication of the police force and to hunt for the Golgotha Virus.[4] Thanatos was awoken by its creator, Dr. Greg Muller, and received orders to kill Umbrella mercenaries on his behalf to protect his research. Nemesis-T Type had orders to hunt down and kill S.T.A.R.S. officers and their allies to prove the parasite's hunting and combat skills against trained military personnel. Tyrant C's usage is unknown, though Tyrant R was activated in the early hours of Thursday 1 October with orders to protect the Umbrella R&D Center's personnel from escaped Hunter Rs. The 'R' soon after rebelled against authority, having overheard a nearby researcher possessed the remote to a bomb in its chest. All of these Tyrants ultimately failed in their missions, either by not completing their objectives or dying in the process. Nonetheless, production of T-103s continued on Sheena Island, and by the time the island fell to a t-Virus outbreak there were at least seventy-eight T-103s of the standard mass-production type.

Information on the research on Tyrants after 1998 is limited. It is known a Tyrant specimen was infected with a prototype t+G Virus strain, dubbed "Tyrant 091" after the strain name ("ver. 0.9.1"). T-011 itself was destroyed in the Caucasus Laboratory during a raid in February 2003. Following Umbrella's demise, the only other known use of Tyrants was in the Eastern Slav Republic in 2011, where three of an unidentified series were activated to wipe-out a Licker incursion in a laboratory.

Tyrants are characterized by their increased height. While Zombies also mutate due to renewed hormone production, Tyrants grow to more radical proportions, from over seven to as high as twelve feet tall. With improvements to the muscle structure, some models of Tyrants have been seen reaching high speeds or possessing the strength to flip over a tank. Mutations in the arms to create claws are not uncommon.

One characteristic of the Tyrants which is not genetic is the possession of a second or third heart. During the creation of the T-002, the Arklay team saw fit to graft a large animal heart onto his right chest in a major surgical operation which effectively gave it a new circulatory system.[2] Other Tyrants have been seen with such hearts, which may indicate that surgery on clones is the standard procedure.

A "Super Tyrant" is the product of a Tyrant bypassing its Power Limiter, a device developed by Umbrella that prevents a Tyrant from experiencing out-of-control mutations. Usually, this only happens when a Tyrant suffers significant damage and results in the tyrant in question gaining more muscle mass as well as claws. Super Tyrants are noticeably more difficult to dispatch than regular Tyrants. The Super Tyrants also lose the capacity to follow any orders that they were given, instead of deteriorating into a berserker-like state. 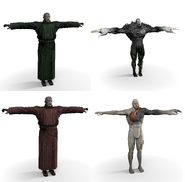 At the top, Tyrant R and its Super Tyrant form; in the center the Tyrant C; in the bottom what looks like a T-002.

Retrieved from "https://residentevil.fandom.com/wiki/Tyrant?oldid=798035"
Community content is available under CC-BY-SA unless otherwise noted.