This unnamed member of the Umbrella Biohazard Countermeasure Service participated in Umbrella's mercenary operation in Raccoon City. He wore a full uniform like Dustin, with the addition of a helmet.

This man was assigned to take part in Operation: Emperor's Mushroom in the early hours of October 1, 1998. His unit tried to take down the experimental Tyrant Thanatos to obtain a blood sample, but he was killed when it became aggressive.

This character has no real stats so he will be unable to cause damage and will move very slow. This can be fixed with character modifier codes designed for characters like this. 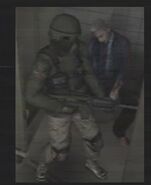 UBCS 3 can only be played in either Resident Evil Outbreak game via a gameshark or similar device. Unlike the other mercenaries in "Decisions, Decisions", he is left unnamed in File #2.

Retrieved from "https://residentevil.fandom.com/wiki/UBCS_3?oldid=727411"
Community content is available under CC-BY-SA unless otherwise noted.