The UT Commander was the leader of a unit of the Undertaker Unit,a specialized group of humanoid B.O.W. (Bio Organic Weapon) models designed to remove incriminating evidence of Umbrella's wrongdoings. The commander was in fact human, and thus the only one not cloned or programmed to kill.

The UT Commander and his subordinates were sent to Sheena Island to accomplish their mission (to destroy all B.O.W.s and witnesses involved in the outbreak). After arriving, he is seen sending his units into action.

During the final few moments of the events at Sheena Island, the commander set off the island's self-destruct sequence.[1][excerpt 1][note 2] 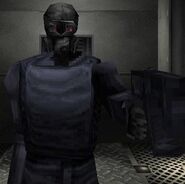 Retrieved from "https://residentevil.fandom.com/wiki/UT_Commander?oldid=480420"
Community content is available under CC-BY-SA unless otherwise noted.