The Umbrella Biohazard Countermeasure Service (UBCS) was an anti-B.O.W. paramilitary force under the command of the Umbrella Corporation, and led by General B. Riley, Lieutenant General D. Carmody and Timothy Cain. The UBCS suffered heavy losses in Raccoon City and soon after became an irrelevance to the company's defence during the global T-virus pandemic.

Following the failure to contain the viral outbreak in Raccoon City's underground Hive complex, the UBCS was sent into the city to eradicate the Undead, entering the city via AS355 TwinStars with orders to land at pre-determined locations around the city. Though this plan would theoretically have allowed the UBCS to entrench themselves, in practice this was far from the reality and teams were kept on the move. When Raven's Gate Bridge was shut down to civilian traffic, Carlos Olivera's Alpha Team was ordered back to aid in its defence but disobeyed orders and fought their way down from a skyscraper and aided law enforcement in defending a blockade. An unspecified location, dubbed "Sector 1", required urgent attention and Romeo and Kilo teams were ordered to regroup there.

As casualties continued to increase, Umbrella lost interest in the UBCS and severed radio communication with surviving operators, with the TwinStars instead aiding in the evacuation of Umbrella personnel on the other side of the gate should it be breached. The only remaining UBCS presence within the city in contact with Cain was the crew of a Sikorsky S-61R sent to transport heavy weapons to Raccoon City Hospital for Project Nemesis, and its subsequent transportation to the roof of Raccoon City Hall. With the subsequent nuclear bombing of Raccoon City, the only survivor of Raccoon City was Olivera, who aided in the theft of the S-61R from Cain.

It is uncertain how large the UBCS is, though it was consisted of both infantry and army aviation units. Infantry units operated within the city as five-man teams, designated by the NATO Alphabet. The UBCS was armed with a great variety of weapons. Their primary weapons were the IMI Tavor CTAR-21 and IMI Micro Galil assault rifles. They carried a variety of sidearms, including the Desert Eagle and Beretta 92FS. They did not seem to carry any explosive weapons besides M67 fragmentation grenades.

Eurocopter AS355 TwinStars were used to transport teams in and out of combat zones, while the Sikorsky S-61R was used to transport heavy equipment and ship B.O.W.s. During the Raccoon City incident, one S-61R was escorted by two McDonnell Douglas Helicopter MD 520N NOTARs.

UBCS mercenaries wear dark urban-colored fatigue pants, black combat boots, a black tactical shirt and a black tactical vest with the U.B.C.S. unit's logo displayed on the back and the operative's surname printed across the top. Their firearms are also varied, from Beretta 92F/FS to Desert Eagle pistols.

They also use a small variety of assault rifles, primarily the IMI Tavor TAR-21, its compact variant, the CTAR-21, as well as a handful of IMI Micro Galil rifles. Their rifles are also outfitted with a variety of laser-sighted modules and tactical illumination devices. 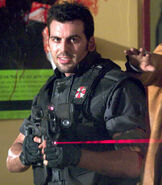 Carlos' binoculars instead have UBCF on them

Retrieved from "https://residentevil.fandom.com/wiki/Umbrella_Biohazard_Countermeasure_Service_(Anderson)?oldid=878978"
Community content is available under CC-BY-SA unless otherwise noted.