The Umbrella Security Service (abbreviated "USS") was an Umbrella elite special forces taskforce. As opposed to the UBCS, the USS were specially trained mercenaries with experience in infiltration, protection, and extraction. As such, their missions involve espionage and intelligence-gathering, contrary to the UBCS' "clean-up" work.

The Rockfort Island Military Training Facility, trained recruits to Umbrella's paramilitary taskforces until the island's capitulation in December 1998. USS agent "HUNK" was trained there in 1996.[1]

The first known usage of USS, or USS-like, units was in 1988. Umbrella CEO Ozwell E. Spencer, growing increasingly paranoid over Dr. James Marcus' research, ordered his colleague's execution.[2] While not sporting their later comrades' trademark gas masks, the unit did share similar tactics employed in September 1998, namely the operation in two-man cells. Their armament of MP5 submachine-guns was also echoed by later units.

The next, confirmable, implementation of the USS was on July 23, 1998. Albert Wesker, an Umbrella researcher; former security officer and current (at the time) police infiltrator, was tasked with the re-opening of the Umbrella Management Training facility,[3] which had been abandoned since Marcus' death. With both the first and second investigation units compromised by an unexpected t-virus outbreak, along with the Ecliptic Express, a private intercity train ready to take Umbrella personnel for management training, the USS' "Delta Team" was called in to investigate. Following Wesker's orders, the two-man team took control of the engine and starting it up again. At its speed when radioing to Wesker, the train was ten minutes away from the training facility's station. However, the team was attacked by a horde of infected leeches and the two men taken down. They would be reanimated as zombies minutes later.

Later that year in September, Umbrella became concerned over Dr. William Birkin's development of the G-virus, a mutagenic toxin set to replace the t-virus. Intent on selling the virus over to the US Government for a military application, the USS was quickly called in to Raccoon City to abort any proceedings. On September 20, police officer Carl Nielson filed a report after encountering an individual skulking through the sewers. Although unable to catch up to the man to question him, Officer Nielson did stumble onto military-grade weaponry such as C4 plastic explosives with a detonator, and a broken infrared scope for customizing firearms.[4]

Not long after, the two-man "Alpha Team", lead by "HUNK", trapped Birkin in his lab. Not intent on an assassination like with Marcus, the USS team's assignment was simply to retrieve the samples. A misunderstanding regarding a sudden noise led to the other team member gunning down the doctor with his MP5. Leaving in a hurry to avoid detection, the two failed to notice Birkin carrying another sample of "G". Injecting it into himself, he mutated into a frightening monster ready for revenge. Several USS teams in the sewers composing of at least eight men were swiftly executed by the renegade doctor, with HUNK barely escaping alive, albeit unconscious.

During the course of the full-scale viral outbreak Umbrella sent in six USS agents to destroy any and all incriminating evidence regarding Umbrella's involvement in viral research. The mission led to the US Federal Government sending in their own specialist team to counter the Umbrella team's mission.

Fully regaining consciousness on September 30, HUNK made his way out of the sewers and to the Raccoon City Police Department's helipad, which he designated an emergency LZ for Nighthawk, one of the USS' pilots. Along the way he overheard an emergency radio broadcast from fellow security service member Goblin 6, who had been left crippled after an attack.

Elsewhere, Rodriguez betrayed the USS and stole a crate containing a failed Bio-weapon. Unable to find his exact location due to the viral situation, a UBCS squad under Arnold was ordered by Tommy Neilson, an Umbrella executive, to kill him on-sight. Not taking any chances of missing a kill for his shooting 'game', Arnold had the surrounding roads mined while he maintained position on a highway overpass with his sniper rifle. Rodriguez would escape the city on a USS helicopter.

The last known usage of the USS was in November 1998 when a small USS team lead by HUNK was assigned to transport a container to Rockfort Island. The mission was controversial in that Alfred Ashford, the island base's commander, did not reveal to the team exactly what was inside the crate - HUNK was concerned over the danger of an unidentified package, that could put him and the rest of his unit endanger.

The standard weapon used by the USS in Resident Evil 2 is the Heckler & Koch MP5 Sub-Machine Gun. Although they have been known to use other weapons such as pistols, with HUNK having his own special handgun, which he nicknames Matilda.

In the latest trailer for Resident Evil: The Darkside Chronicles, the USS standard MP5 is replaced with the Steyr TMP. Also, judging by the inscription on the barrel of the Custom Magnum Parts found in Resident Evil 2, the USS's armory also contained some heavy, albeit impractical firepower; a 10-inch version of the IMI Desert Eagle semi-automatic magnum handgun chambered in .50 Action Express-- when or where it could have seen operative use is unknown.

In Operation: Raccoon City, the units arsenal is much bigger, likely from the heavy conditions of the mission. Weapons include M4 Carbine, M16, Heckler & Koch G36K, and AK-47 assault rifles. There is also larger weaponry present such as a M240 heavy machine gun. 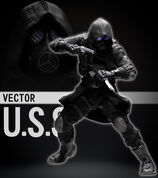 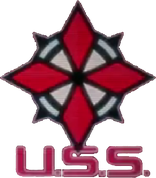 Retrieved from "https://residentevil.fandom.com/wiki/Umbrella_Security_Service?oldid=149779"
Community content is available under CC-BY-SA unless otherwise noted.