The Umbrella Security Service (abbreviated "U.S.S.") was a security force under the control of Umbrella HQ. It was one of several paramilitary organisations used by the company, including the Umbrella Biohazard Countermeasure Service, the Undertaker Unit and the Intelligence Division. The U.S.S was an expansive organisation, with branches specially trained and equipped for different situations, ranging from guarding Umbrella facilities to covert operations. Dissolution was in 2003

The U.S.S. developed as a need for adequate protection of facilities containing classified biotechnology for the US military. Facilities such as the Arklay Laboratory consisted of small garrisons which would protect them from intruders. A further use of the U.S.S. was that of covert operations, with agents answering directly to Umbrella HQ being ordered out to kill or detain threats to the company. The first known use of U.S.S. for this method was in 1988 when Dr. James Marcus was assassinated by two guards on the orders of Umbrella CEO Dr. Lord Spencer.[1] In 1993, the U.S.S. college was moved to Rockfort Island, under the command of Lord Ashford. Along with a new military training centre, a concentration camp was built for the guarding of Umbrella's enemies.

The U.S.S. performed a number of functions during the 1998 Raccoon City Destruction Incident. When a t-Virus strain spread across the Arklay Laboratory as an airborne pathogen, the local garrison was ordered to fortify the complex per quarantine procedure. Access to the subway system was cut off following the evacuation of important bio-weapons research, and personnel on the watchtower began shooting Umbrella USA employees trying to escape the complex. These guards where, however, infected and their ability to control the situation ended within a few short weeks. When it was determined the remaining guards could no longer protect the facility, the Raccoon Disaster Contingency Committee planned out a mission to destroy the facility.[2]

In July 1998, an attempt by Umbrella USA and the Intelligence Division to re-open the abandoned management training school also failed. The 1st Investigation Unit, a force consisting of U.S.S. personnel and maintenance staff, was attacked by mutant leeches and many were killed or infected. The leeches attacked other facilities in the area, including NEST and a water treatment plant, infecting more guards. When the 2nd Investigation Unit, consisting of management staff, was attacked on the train ride to the training school, a two-man covert operations unit, "Delta Team", was sent in to investigate. The two were also themselves attacked and infected by the leeches. By the morning of 24 July, all personnel attacked by the leeches were killed, as biohazard containment procedures took force and destroyed the training school and water treatment plant. The following morning, any surviving guards at the Arklay Laboratory were themselves killed when that complex was also destroyed.

In September, U.S.S. personnel in Raccoon City were caught up in an intense power struggle over the completed G-Virus, when Umbrella's Intelligence Division received word that NEST's chief researcher, Dr. William Birkin, was planning to hand the virus over to the US military. What became of NEST's local U.S.S. garrison is uncertain, but Umbrella HQ was forced to send in a squad armed for covert operations into the city. Operation: NESTWRECKER carefully planned out an infiltration of the city's sewers to gain covert passage to NEST on 22 September, rather than dropping via its surface facade of a factory in the Arklay Mountains. Though Alpha Team was successful in recovering the G-Virus, Birkin infected himself and became a violent mutant. When rendezvousing with their backup team at the sewers, Birkin caught up and massacred the squad, leaving the mission leader, HUNK, as the sole confirmed survivor. He was able to escape the city on the early hours of 30 September with another sample of G-Virus.

As the city fell to a t-Virus outbreak brought on by contaminated drinking water, U.S.S. guards at other facilities in the city were devoured or infected, leaving no Umbrella facility defended. When Umbrella HQ learnt that the US military was to destroy the city with thermobaric missiles, the 2nd U.S.S. Squad was sent in via Chinook with orders to retrieve Nyx, an experimental B.O.W., which was stranded at a dockyard along the Circular River. The team suffered high casualties, with Cpt. Rodriguez returning to the Chinook as the only uninfected survivor. Rodriguez went rogue, and escaped the city on his own rather than meet with the executive of the dockyard, Tommy Nielsen.

Though the U.S.S. lost considerable numbers in Raccoon City, their operations continued. After receiving a tip-off from the Intelligence Division that H.C.F. had spies on Rockfort Island, Lord Ashford had the T-078 transported to the island. HUNK was placed in charge of the transport mission, but would later file a complaint as not only was cargo transport an improper use of the U.S.S. but that he and his team were not allowed to know the nature of the cargo, creating a safety risk.

In mid-December, Claire Redfield was detained by Paris Laboratory's garrison after infiltrating the premises, causing the deaths of at least two guards while pursued by an MH-6 helicopter. 3rd Squad leader Rodrigo Juan Raval, who personally captured Redfield, took her to Rockfort Island as a new concentration camp inmate. Soon after arrival, H.C.F. made their attack on the island, dropping bombs on the island from transport planes. Their spies then sabotaged the military training center's lab, releasing the t-Virus into the surrounding area in an airborne form. The U.S.S., already at a disadvantage, was now at its own throat, and lost control of all facilities on the island.[notes 1] A general evacuation took place, with infected survivors fleeing in transport planes while H.C.F. agents searched for island for valuable research data. Raval himself, wounded in the fighting, released Redfield from captivity, and was killed the following day by Gulp Worm, an escaped B.O.W. created for U.S.S. training purposes.

The Umbrella Security Service was versatile in its uniforms and equipment, with security personnel provided with what was deemed essential to their mission.

U.S.S. personnel on guard duty typically wore military-style fatigue. The guards stationed at the Arklay mansion wore normal clothing, blending in with the other staff. Security posted in the Rockford Island palace and military training facility wore police-type uniforms, while the guards in the concentration prison camp wore the trainee woodland camouflage fatigues (prison guard duty was most likely part of the U.S.S. training program in order to mold the recruits into ruthless, obedient and desensitized operators). Guards at Umbrella Europe's Paris Laboratory wore dark blue uniforms with matching caps and a black belt, and were armed with AK-47s.

Claire encountered these guards when raiding the Paris Medical Lab in December 1998. The security force was heavily-armed and used a helicopter as a gunship to try and take her down. They suffered from many casualties during their stunts (And Claire's quick thinking). It was here that Rodrigo Juan Raval, the leader of the 3rd Security unit captured Claire and sent her to a concentration camp on Rockfort Island who was (One of the privsols knocked her unconscious upon arrival) also policed by the division. However, the Security and Staff on Rockfort Island are wiped out when a rival "Organization" bombed the facility and released the t-Virus.

The standard uniform for U.S.S. agents on covert operations were black or dark grey clothes, with armour plating covering the chest and a helmet. Gas masks were also worn in the event of exposure to gas canisters. During the Raccoon City Destruction Incident, some U.S.S. agents chose to remove their helmets and gas masks. The U.S.S. agents assigned to Operation: NESTWRECKER were armed with submachine guns (MP5 or Steyr TMP), C-4 plastic explosive, and infra-red scopes for customised firearms.[3]

HUNK without his mask

HUNK and an unknown member of Alpha Team 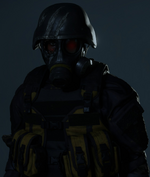 A unmasked U.S.S. soldier with a black/gray beret on

An Umbrella Security force soldier pointing his AK-47 at Claire.

The zombified Security force soldier with the dual M-100Ps trying to attack Claire after breaking a window.

The police-like zombie security guards from Darkside Chronicles, note they were first seen in CODE:Veronica.

Retrieved from "https://residentevil.fandom.com/wiki/Umbrella_Security_Service?oldid=811972"
Community content is available under CC-BY-SA unless otherwise noted.