The Umbrella Train (Rear Carriage) is a section of the train.

The rear carriage of the train are stored with large crates filled with various types of research materials.

The player can run to the back of the carriage to find an item box, typewriter, ink ribbon and the platform key.

When the train is in transit, the grotesquely mutated William Birkin will appear through the back of the train and a short timer will begin to count down, during which the player must quickly defeat him before returning to the front carriage.

William Birkin is fought in this area, there is also a 5:00 timer during this boss fight. The fight sequence is heavily scripted, the player needs to kill William's tentacles as they appear on the screen, then hit William. Even if his HP bar is empty, it's still required to shoot the coupler that's below him. 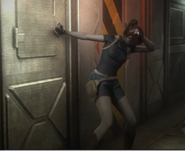 Retrieved from "https://residentevil.fandom.com/wiki/Umbrella_Train_(Rear_Carriage)?oldid=661202"
Community content is available under CC-BY-SA unless otherwise noted.