This unidentified Tyrant series was encountered by US federal agent Leon S. Kennedy in the Eastern Slav Republic during its civil war in February 2011. At least three were acquired and utilized by Svetlana Belikova, numbered "008", "013", and "016", suggesting that there are more models in the series.

The Tyrants were released from their storage capsules underneath the Presidential palace under Svetlana's orders when it became evident that a rogue US agent, Leon S. Kennedy; a spy named Ada Wong and the leader of the secessionists, Alexander Kozachenko, had made their way into the facility and threatened to destroy her plans. With Kozachenko utilizing his Dominant Species Plaga to control the Plaga-hosting Lickers, Belikova's security force was annihilated, and she resorted to activating two of her Tyrants to stop them.

Leon and Kozachenko agreed to help each other and escaped from the Tyrants after the Lickers proved useless. They escaped via a ladder going up the elevator shaft, causing the two Tyrants to fall to the bottom of the shaft when their combined weight exceeded the elevator's limit. Escaping above ground, a third Tyrant - "013" - revealed itself by awaiting from above ground (having been stored elsewhere). 013 was tricked by Kozachenko into killing a Licker by smashing its fist through the creature against an oil truck, allowing Leon to fire at the tanker and cause it to explode, enveloping the Tyrant in flames.

Unfortunately for the duo, "013" survived. The explosion damaged its power limiter, causing it to mutate into a Super Tyrant. It began hunting down Kozachenko until Leon drew its attention by shooting it with a missile, prompting the beast to pursue him instead. The Tyrant proved more than a match for Leon and managed to grab him. Realizing that his one remaining ally was about to die, Kozachenko sent another three Lickers to attack the Tyrant. Although they were killed quickly, the attack distracted the monster enough for Leon to escape whilst he commandeered a tank, which he used to ram into "013". Even though the force of the impact was able to knock the Tyrant back, "013" quickly gained enough strength to counter the force of the tank, leading to a stalemate whereby neither could move forward any further. Leon made his way into the tank's turret, which he used in an attempt to kill the Tyrant. Initially avoiding the first firing attempt, Leon took to playing with the creature, repeatedly hitting it in the face by moving the turret around. Becoming increasingly agitated over being unable to kill Leon and Kozachenko, it moved its force upward in an attempt to tip the tank over. Close to doing so, Kozachenko sent in a final Licker to jump onto the "013"'s face. Taken aback by the attack, Leon was able to turn the turret directly towards the Tyrant, firing straight through it and the Licker. The blunt-force trauma sustained by the impact decapitated the Tyrant and its corpse was crushed under the tank.

Leon and Kozachenko's celebrations were short-lived when the "013"'s compatriot pair, both in Super Tyrant forms, arrived at the scene after finally reaching ground-level. They were quickly destroyed by aircraft as part of a joint US-Russian invasion of the country.

This Tyrant series was aesthetically similar to Umbrella's T-103 model, which entered production some thirteen years prior, however, they were noticeably taller. The Super Tyrant form, unlike previous Tyrants, lacked a clearly-exposed heart. In addition, unlike previous Tyrants, they only produced one moderately mutated claw arm as opposed to two giant ones. This gives them dexterity unseen in previous Super Tyrants as one was able to not only catch a rocket in mid-flight but also clip the tail of it in one twist of its wrist to send the rocket flying back at its shooter. In their "normal" form, they were easily capable of killing Lickers with their colossal boots and punching them into an instant death; the Lickers, on the other hand, failed to make significant damage on them despite their numbers. This is particularly noteworthy, as the Licker's defining weapons - its large claws and tongue - are fully capable of impaling and decapitating ordinary humans, whereas they could only restrain these Tyrants with their signature appendages for brief moments. 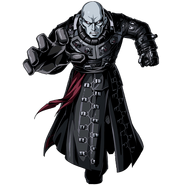 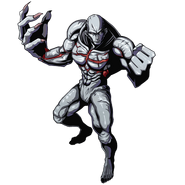 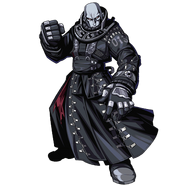 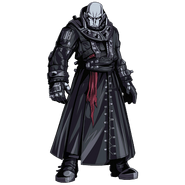 Retrieved from "https://residentevil.fandom.com/wiki/Unidentified_Tyrant_series?oldid=808635"
Community content is available under CC-BY-SA unless otherwise noted.