The unlockable costumes in Resident Evil can be worn by Jill Valentine and Chris Redfield upon meeting certain requirements in the game. On occasion, Rebecca Chambers will wear a costume as well.

To gain these costumes, the player must complete Jill or Chris' story modes with the best endings. After the ending, a screen will display showing that the Closet Key is unlocked. The key unlocks the closet door in the costume room. Inside, Jill and Chris can choose between costumes.

"Please note that the PC and Saturn Versions of the game includes different costumes."

Chris' Sega Saturn costume.
Add a photo to this gallery

In Resident Evil: Director's Cut, these costumes are worn by default in Arrange Mode. In this mode, the closet is already unlocked. In Chris' story, Rebecca also wears a new costume.

In Resident Evil: Deadly Silence, these costumes are unlocked by completing Jill or Chris' story modes with the best endings on Rebirth Mode. In Chris' story, Rebecca also wears a new costume.

In the remake, these costumes are unlocked by completing Jill or Chris' story modes once and then twice on the same save file. After the ending, a screen will display showing that a costume is unlocked. The Closet Key can be found in the item box and will unlock the secret door in the exhibition room, leading to the art supply room where the costumes can be chosen. In Chris' story, Rebecca also wears a new costume.

"Please note that the images are taken from the 2015 HD Remaster version on PC, and may not represent the original GameCube version."

Rebecca's cowgirl costume (back).
Add a photo to this gallery

On October 1, 2014, Capcom launched a video on the official Resident Evil YouTube channel announcing the inclusion of Chris and Jill's BSAA uniforms in the Resident Evil HD Remaster, following the success of the Raccoon City Contagion promotional campaign.[1][2] These uniforms were worn by Chris and Jill in the Lost in Nightmares DLC from Resident Evil 5, as well as in Resident Evil: Revelations. The models used represent their appearance in 5 instead of the models used in the remake. These outfits are available in all versions of the game.

These outfits do not need to be unlocked and, like the costumes from the original version, can be selected from the character select screen. They can also be accessed in the costume room after you obtain the Closet Key by beating the game once. Only the character selected to wear the BSAA uniform will wear it in the main game. The unselected character will be in their default S.T.A.R.S. uniform.

Chris' "BSAA" costume (back).
Add a photo to this gallery

Rebecca costume concepts 3.
Add a photo to this gallery 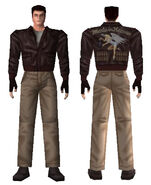 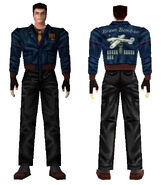 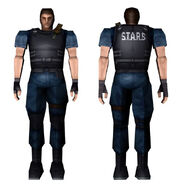 The closet in Deadly Silence.

Rebecca's knife turns into a pom pom in Deadly Silence.

Chris' "BSAA" costume on the character select screen.
Add a photo to this gallery

Retrieved from "https://residentevil.fandom.com/wiki/Unlockable_costumes_in_Resident_Evil?oldid=808849"
Community content is available under CC-BY-SA unless otherwise noted.