Below is a list of all unlockables in the original Resident Evil 2.

These costumes are only available on Normal or Hard mode. In order to gain access to them, the player must make their way from the wreckage at the start of the game to the front entrance of the police department without picking up any items along the way. If done correctly, a t-Virus-infected Brad Vickers—S.T.A.R.S. Alpha team's former pilot—will appear in the small tunnel below the station, accessed by a stairwell on either side of the area. Brad possesses more health than an average zombie and will inflict more damage to the player upon attack. After being defeated, Brad will drop the Special Key.

Brad can only be unlocked in either character's "A" scenario. After completing the game and continuing the opposite character's "B" scenario, Brad will appear in the same area outside of the police department if he was successfully unlocked in the previous "A" scenario. The amount of items gained in the "B" scenario have no effect on Brad's appearance; however, the player will still need to defeat him to obtain the key.

His first outfit on the left consists of a leather jacket—with a large skull design on the back, an American flag patch on the shoulder, and stylized text over one of the chest pockets—over a white and black ringer T-shirt, blue jeans, and brown leather boots. The second outfit on the right is an alternate R.P.D. uniform with an initialed baseball cap, navy blue tank top, green fatigue pants, and black boots.

Leon holds the handgun differently with either outfit equipped, only using his right arm and tilting the gun to the side as he aims. Upon equipping his handgun, its firing rate will slightly increase (only affects the Handgun exclusively).

In the Nintendo 64 version of the game, these two costumes are replaced by different ones. Though the way to unlock them remains the same.

The first of Leon's outfits on the left is a leather biker ensemble. It features a leather vest over a white shirt, a bandana, a pair of sunglasses, baggy leather pants, and leather boots. His second outfit on the right is an armored S.T.A.R.S. uniform. It consists of a blue bulletproof vest with the S.T.A.R.S. emblem on the back, a set of blue camouflage fatigues, leather boots, and a baseball cap featuring a simplified variation of the S.T.A.R.S. emblem. The owner of the uniform or its purpose is unknown.

Leon's aiming is only changed in his first outfit. The S.T.A.R.S. uniform uses his standard pose for aiming. 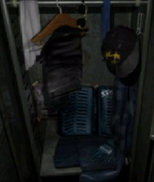 Claire only has access to one costume. It is a biker outfit with a leather jacket—adorned with flame designs going up the sleeves and a "Let Me Live" design on the back—and leather pants, a cropped red top, a red bandanna, and a pair of cowboy boots.

To compensate for her lack of a second outfit, Claire receives her own exclusive weapon, the Colt S.A.A..

In the Nintendo 64 version of the game, Claire's costume is also replaced by a different one, and the way to unlock it also remains the same.

Claire wears a purple jacket with red accents that has straps fastened across the front, a sheath for her knife, and nothing underneath. The back of the jacket features the logo of Angel Studios (now Rockstar San Diego), who developed the Nintendo 64 port of the game.[1] She also wears a matching headband and pants and a pair of black leather boots.

Once again, Claire lacks a second outfit but gains the Colt S.A.A. in exchange.