Start a Wiki
watch 01:51
The Loop (Games)
Do you like this video?
Gaiden
(Game Boy Color)

The unnamed Umbrella captain (dubbed as Capt (カン長, Kanchō?)) was a submarine captain working for one of Umbrella's paramilitary organizations. He sent the submarine to the Starlight commercial cruiser to capture a special B.O.W. that had been implanted within a young girl named Lucia.

The captain was successful in obtaining the girl, thanks to the help of Barry Burton, who claimed to be working with Umbrella. However, Barry revealed he was only pretending to aid Umbrella to hijack the captain's submarine and learn why Umbrella was interested in Lucia.

When the captain informed Barry about the B.O.W. placed inside Lucia, Barry ordered him to have it removed. The subsequent operation was successful, but the B.O.W. escaped its container and drained the captain's life force, turning him into a zombie. Immediately afterwards, Barry killed him.[1] 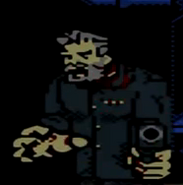 Retrieved from "https://residentevil.fandom.com/wiki/Unnamed_Umbrella_captain?oldid=781643"
Community content is available under CC-BY-SA unless otherwise noted.