Excella Gionne (the host) and many Majini corpses (biomass)

Uroboros Aheri is a specific manifestation of the virally created giant Uroboros creature. It is the result of Excella Gionne's mutation.

Aheri was created when the Uroboros virus rejected the DNA of Excella Gionne, mutating her body instead of making her a superhuman. Albert Wesker seemed to be fully aware that this would be the result of her exposure to the virus, as not only did he abandon her on the deck of her tanker after injection, but he also left her in the vicinity of a large pile of dead Majini, which Aheri consumed to grow to its monstrous size.

Upon its mutation and transformation of Excella Gionne, Aheri immediately consumed the corpses with its root-like tentacles, absorbing their organic matter into itself and growing into an enormous size, which was Wesker's intention, hoping the creature would kill BSAA agents Chris Redfield and Sheva Alomar. Uroboros Aheri has four minor cores. Each minor core required 10000 damage to destroy. (For example, 2 shots from upgraded S&W M500 Revolver) When they are destroyed, a much larger core will then be exposed. Destroying the main core will kill Aheri. However, a single RPG-7 to the core will destroy it.

Aheri will occasionally produce small masses of Uroboros tentacles on the ship to attack Chris and Sheva up close. Though very weak, these creatures will drop ammo and herbs when killed. A player may stall in the fight to gather as many resources as he or she can carry.

Chris and Sheva managed to defeat Aheri with the use of a conveniently located Satellite Laser Device, which relayed target data to an orbital satellite. After three hits to its main core, Aheri will be destroyed. 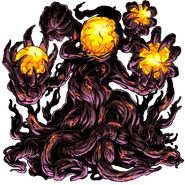