Uroboros Mkono was a specific manifestation of the virally created Uroboros creature, "birthed" from an anonymous test subject in a TRICELL laboratory. It is possible that Mkono's transformation was triggered by Excella Gionne, who was watching from an enclosed observation deck, so that the creature, created when the Uroboros virus rejected the DNA of its host, would kill BSAA agents Sheva Alomar and Chris Redfield. It was far more dangerous than the Uroboros Test Subject, being much more aggressive and having two cores instead of one. Mkono was defeated through the exploitation of the creature's sensitivity towards extreme heat; the laboratory contained a flamethrower and refueling station originally designed to destroy biohazardous material in case of a leak. Redfield and Alomar used the flamethrower to weaken Mkono and then shot at its exposed vital organs. However, it can be brought down by weapons fire.

The easiest way to defeat Uroboros Mkono is with a Rocket Launcher – one direct hit will kill it, even on Professional mode. A Rocket Launcher can be bought for ₦10,000 or repeatedly found in an upturned boat at the beginning of Chapter 3-1 by quitting the game after collecting it, depositing it into the inventory, and restarting the chapter.

Otherwise, when damaged by fire, Uroboros Mkono will temporarily sprout three tentacles upwards from its back; these are its weak points, and should be shot before Mkono recovers and withdraws them. Flame Rounds and Incendiary Grenades are extremely effective against Mkono; five Flame Rounds and one Incendiary Grenade are located in the hallway just before the fight, and three more Incendiary Grenades can be found in the boss arena. Furthermore, three gas canisters can be knocked over; players should shoot these once Mkono walks over and absorbs them. Finally, a rechargeable Flamethrower can be found resting on the wall as a final offensive against the Mkono, though it will need to be refueled throughout the fight and is the least effective at hurting the Mkono, as it will often attack the player with the Flamethrower unless its arms have been temporarily severed. 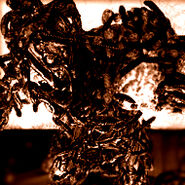 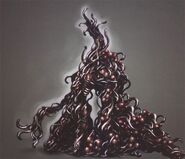 Uroboros Mkono card in Deadman's Cross
Add a photo to this gallery
Retrieved from "https://residentevil.fandom.com/wiki/Uroboros_Mkono?oldid=782483"
Community content is available under CC-BY-SA unless otherwise noted.