The first test subject for the Uroboros virus was an unidentified man who lived in the town of Kijuju.

This unnamed individual was a resident of Kijuju. During the Uroboros Project, Albert Wesker and Excella Gionne required test subjects for the Uroboros virus, a mutagenically advanced variant of the Progenitor virus. They sent their brainwashed servant, a cloaked and masked Jill Valentine, to capture an African Kijuju citizen to serve as a first draft template to demonstrate the effects of Uroboros. This man was brought to a secret facility and injected with Uroboros. Jill kept close observation over the man after the injection to see if there were any signs of worthy genes. However, it was soon discovered that he was in fact not worthy and was consumed by Uroboros tendrils, turning into the first known Uroboros creature.

The beast would eventually wipe out Dan DeChant and his entire team, an event observed by Ricardo Irving, just before his escape alongside the cloaked Jill. As the first recorded creature transformed by Uroboros, this man's monster form was later destroyed by Chris Redfield and Sheva Alomar.

Run to the incinerator room and make him follow you to the incinerator. Very quickly run out from where you came in and use your weapons to keep him in (shotguns are excellent for that.). While you fire at him, command Sheva to pull the lever and lock him in to torch him. On co-op this boss is much easier. If you replay that stage when you have a weapon that does considerable damage (Gatling Gun, RPG, S&W Model 500, etc.) you can simply start firing at it and eventually it will be destroyed without you using the incinerator. Doing it that way, it will drop the "golden ring" treasure which is worth 5.000 Naira at the market. To also speed up the process without needing to use the Incinerator, you could always use the Explosive red canisters to kill this enemy too. 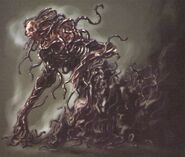 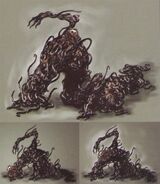 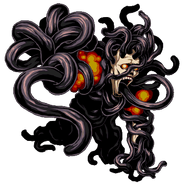 Uroboros Test Subject in Minna to BIOHAZARD Clan Master.
Add a photo to this gallery
Retrieved from "https://residentevil.fandom.com/wiki/Uroboros_Test_Subject?oldid=806470"
Community content is available under CC-BY-SA unless otherwise noted.