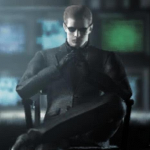 Hi im AlbertWesker2468 and i enjoy the Resident Evil series, Games and the Films. I started playing the games back in 2002 and ever since then ive been a huge fan :D. My favorate character in the Resident Evil series is (as my name suggests :D) Albert Wesker. I love the fact that he can completely manipulate his allies and corporations (e.g. Umbrella and Tricell) and completely gets what he wants, and the fact that he has a life time nemesis, Chris Redfield, who is constantly disrupting his plans. I feel that they killed Wesker off too early in Resident Evil 5 and i think he should have appeared in Resident Evil 6, where both Chris and Leon could deliver the final blow together, now that would have been a perfect ending for one of most best video game villains in history. I cannot wait for Resident Evil 6 as it looks like a very exciting game that i will be playing non stop when i get it, of course, i'll be playing Leons' story first :D

My Favorite RE Enemy

This might come at a bit of a shock to you all, but out of all of them (They are all awesome), the one i like the most has got to be Giant Chainsaw Man. I don't know why but there's something about him that i find really fascinating. A super fast insane freak that carries a Double Chainsaw, what more can you want :D
Retrieved from "https://residentevil.fandom.com/wiki/User:AlbertWesker2468?oldid=296381"
Community content is available under CC-BY-SA unless otherwise noted.