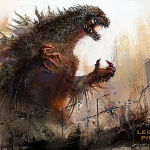 I was exposed to Resident Evil via TV, on a now canceled video game serial with the ostentatious title "Best Game Ever." One segment followed the rather cheesey original game, and I was mildly interested. Unfotunately, I (was) a Nintendo kind of guy (at ten years old my gaming options were limited), and I only owned a DS and an original N64. Both Deadly Silence and Re2 were out of reach, though, so I never managed to actually *play* the games until Re4 for the PS2, which is probably why I take a more charitable view to the game than some...other people do. Since then, I have played Re2 and Re3, and have completed the ClaireA/LeonB story mode twice. Re3 I have for the PC, and the port is truly Godawful (no Mercenaries, Epilogues, or unlockable weapons are included, but they *did* put in the wardrobe as a starting thing (nice to know they know what's important, right?).

Currently, I own the entire series thus far for the PC. Resident Evil refuses to run on any computer I install it on. Resident Evil 2 is a lot of fun, especially with the immediately unlocked Battle Mode. Resident Evil 3 wasn't all that great on the PC, and I'm having issues with my copy and GameStop. Resident Evil 4 has one of the best modding communities of any game I've ever played, although Capcom's humongous box cracked my DVD. Resident Evil 5 was a halfway port, and the PC controls are useless in Mercs. I had to buy a gamepad. Revelations, Re6, and Re4 HD use Steam, and the less said about that, the better.

Why am I here? I found the RE Wiki while researching for some fanfiction I was writing (yes, I'm one of *those* losers), and I soon found that it was a truly well kept up archive of Resident Evil knowledge.

I'm an American male who aspires to be an author with the talents God has given me. I live in the Southern area (not *The* South, mind you, though people will probably say I have an accent if they don't live near by).

Favorite Characters from RE:

Heroes: I like Leon S Kennedy as my top. Guy's just a beast. Chris Redfield is alright, I guess, though I thought he was kind of a wuss in the old game for abandoning Jill and Rebecca to call Brad at the end (gameplay mechanics, I know). Barry is cool. Great to have him back for Re5 (damn you Capcom for no PC Reunion DLC!). Billy Coen has grown on me. Still don't much like the guy, but he's better than he used to be. Kevin Ryman is cool, if unused very often.

Heroines: The women of RE are a bit more likeable than the men. None of them really stick out (except Ashley) as bad characters. Still, my top spot is a toss up between Rebecca Chambers and Claire Redfield. Both are the kind of girls I like being around (Rebecca's book smart but not overconfident, while Claire is compassionate and smart too, in her own way). Jill is a close second, though I wish Capcom would stop using her as a sex icon (shocker!, I'm a straight guy who's not a pig). Re3 and 5 were a bit much. I like Sheva Alomar as well, if she is a bit underdeveloped. She needs a game or two to get more backstory and personality, like Kevin and my next pick, Yoko Suzuki (who, as far as I know, is one of only two Asian characters in the series and the only Japanese). Again, I like the concept but needs more development.

Villians: Where would we be without bad guys? At the top, for me, is Albert Wesker, of course. He's the guy we all love to hate, the immortal asshole with his arrogant uppercrust accent and stupid sunglasses. He's a bad man, and we all know it. Close behind is Jack Krauser, more for what he could be than what he is. I *liked* Jack in the Darkside Chronicles. He's a good foil for Leon. I hope we get to see him again. Ada Wong is close as well. Yes, she's a bit too complex to be a pure villain, but at the end of the day she's still in it for herself. And, she has almost as many game credits as Wesker (more, at least, than any other bad guy). She has some of the most depth of any character, and I want to see more of her in the future. Next we have William Birkin, in his Re2/Darkside persona. The Resident Evil 0 version doesn't count. On some level, I pity Birkin for what he becomes, a monster who murders his wife and nearly kills his only child, while at the same time destroying the city in which he lives and ultimately the company for which he works. Still...he did all the above stuff, which throws sympathy out the window. And he's so egocentric and paranoid, he's a good psychopathic villain. I want to see more of his early years with Wesker and Annette, when they were all three just Umbrella lab jockeys. And lastly...HUNK, or favorite Easter Egg. The strong, silent type. HUNK's a hard guy to place. He never interacts with the other characters (aside from leading the team that kills Birkin), so we know little about him. He's such a badass in Re4, though, that Capcom *has* to do something with him.

Retrieved from "https://residentevil.fandom.com/wiki/User:Godzillafan93?oldid=347964"
Community content is available under CC-BY-SA unless otherwise noted.