Hey there, Forerunner here. A few weeks back, we did a Twitter poll asking regular readers who don't contribute why they don't. A significant number answered that they simply do not know WHAT to edit.

For you fans who really have no idea what needs fixing, we do in fact have a lot of articles to update, and we tag them accordingly. However, many that are tagged are in need of edits the average user may not be too interested in (e.g. listing all the "Examine" text in a particular room in a particular game). Instead, I'll list a few categories full of pages that you can work on without much worry.

I hope to make this a multi-part series, of which this will be part one. So, let's begin with entry #1 in the list.

We have articles for most (we hope eventually all) cutscenes in the games. They are divided into "Plot" (describing the story that's unfolding) and "Transcript" (what is actually said) sections. Many are lacking the Japanese subtitles that we add in a table to compare with the English dub (to spot translation errors). However, we don't expect you all to start typing full Japanese transcripts.

Instead, let's focus on pages that are lacking the English text. We have a number of entries relating to the 2020 Resident Evil 3 remake (see: here) so we can start there.

Just take out the {{Official localisation|scene=yes|game=Resident Evil 3 remake}} and fit in the subtitles between the <poem></poem> code. If you ever run into doubt but think it looks right, save it anyway and ask an Administrator to double-check. 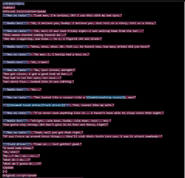 And when the transcript is added (and tidied to look presentable)
Add a photo to this gallery
Retrieved from "https://residentevil.fandom.com/wiki/User_blog:Forerunner/Staff_Blog:_I_Don%27t_Know_What_to_Edit?oldid=847440"
Community content is available under CC-BY-SA unless otherwise noted.
FandomShop DC Trivia GalaxyQuest