Veronica Plant
The V-Complex, (assumed to stand for "Veronica Complex") was an enormous monstrosity that was created after the Veronica Plant had merged with Javier Hidalgo. It made its first (and likely only) appearance in Resident Evil: The Darkside Chronicles.

Following the defeat of Hilda Hidalgo, Javier fled to the arboretum, where he merged with the Veronica Flower; forming the massively enormous V-Complex. As Leon, Jack, and Manuela recovered from their battle with Hilda, the V-Complex attacked them, forcing them to flee outside and behold the monstrosity Javier had become. Leon and Krauser's attacks only seemed to aggravate the behemoth, but the tide turned when Manuela came to terms with the T-Veronica virus inside her and harnessed its power against her mutated father.

After a long, fierce battle, the V-Complex was incapacitated, allowing Javier to regain control of himself long enough to beg for death. Leon and Krauser obliged by shooting the V-Complex in its exposed core, finally slaying the abomination. Its corpse burst into flames as the trio escaped on a helicopter, with Wesker intently observing from the nearby hills.

The V-Complex was capable of reproducing asexually. The subordinate organisms produced from its body could fly and would aggressively defend the Complex.

The t-Veronica virus can become extremely active under elevated temperatures and humity, causing less controlled mutations than in the cold Antarctic environment. This makes the V-Complex much larger and monstrous than Alexia Ashford, Steve Burnside and Alexander Ashford's mutated forms. If the Complex hadn't been destroyed, 60% of the Amazon could have been contaminated within 48 hours.[1]

The V-Complex is the final boss of the Operation Javier scenario, with the battle against it taking place in the fifth and seventh chapters (from the perspectives of Leon and Krauser, respectively). Apart from an increase in damage, aggression and durability in Chapter 7, both fights are identical.

The first encounter with the V-Complex is when it smashes its right arm into the warehouse where Leon and Krauser fought Hilda Hidalgo. It mainly attacks with small tentacles erupting around its claws - players must quickly fire at the exposed red flesh between the individual claws, as the tentacle attacks are difficult (if not impossible) to interrupt. After taking enough damage, the V-Complex will retract its arm, leaving behind the inner layer of claws, and players can escape outside through a tunnel. During the escape, the V-Complex will send one of its larger tentacles after them, which must be dodged in a Quick-Time Event.

The real battle begins when Leon, Krauser, and Manuela get outside, where they confront the V-Complex directly. Initially, attacks should be aimed at its skull for the most damage, while using button prompts to avoid the beast's claw slams and slash attacks. After a while, a cutscene will play, and the next stage of the battle begins.

After Manuela resolves to use the power of t-Veronica against the V-Complex, players must target the monster's exposed leg joints to cripple it. Manuela will periodically provide support by throwing her flammable blood at the V-Complex's joints, but players should not rely on her to finish the fight alone if they want the good ending - if the battle against the V-Complex takes more than ten minutes, Manuela will die of blood loss in the ending cutscene.

While attacking the legs, players will have to worry about the V-Complex's burrowing tentacles and leg stomp attacks, both of which can usually (but not always) be dodged via a Quick-Time Event. Additionally, the V-Complex can release deadly spores from flower-like growths on its underside, which players must shoot down to avoid damage. The red spores should be targeted first, as their explosions can destroy other spores around them. Grey spores have a chance to release blue acid/pollen that must also be shot down.

After losing two of its legs, the V-Complex will be immobilized, forcing the Veronica Flower to start absorbing Javier's body to fuel its regeneration. At this point, players return to facing the monstrosity head-on, but with a new weak point in the form of the exposed core within the V-Complex's opened skull. At this point, the beast reverts to using its arm and sickle attacks, with occasional tentacle attacks for variety. If sufficient damage is dealt to the core, the V-Complex will fall to the ground, allowing players to finish it off by attacking the core at point-blank range. 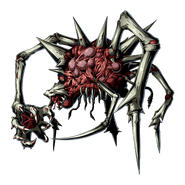